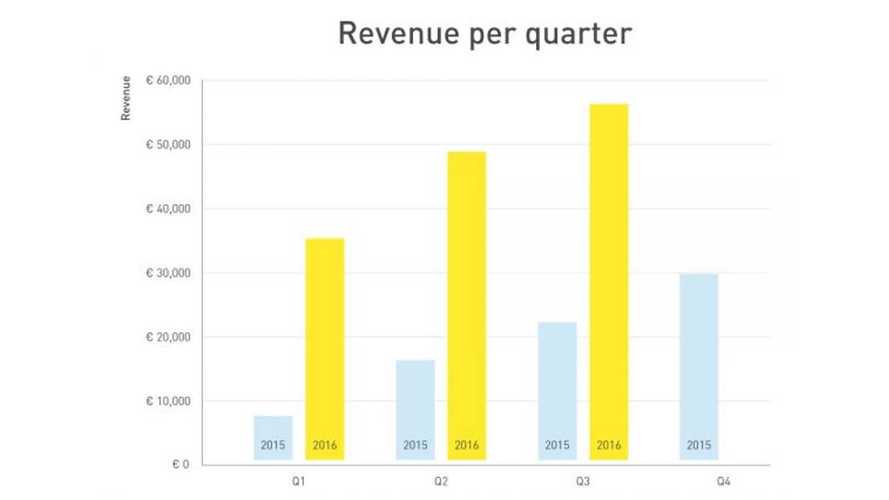 With more and more plug-ins on the road, Fastned continues to increase revenues generated from its fast charging network in the Netherlands.

In the third quarter, revenues increased by an impressive 153% year-over-year to €56,180...which obviously still does not represented a lot of capital at this stage of development.

Part of that increase as mentioned is more electric cars, but also more charging stations, more usage per charge and a new Power price plan.  Also potentially providing more revenue is an agreement with the largest Volkswagen dealer of the Netherlands (Van den Udenhout) to offer a year of Fastned charging with every new full electric e-Golf purchased.

The average energy dispersed is over 46 kWh per customer per quarter. Another metric of revenue is an average of €0.48 ($0.53) per kWh delivered.

Fastned points out that the growth of its network outpaces the growth of the overall market for electric vehicles (which approximately 30% YoY).

"Today approximately 12,000 full electric vehicles are on the road in the Netherlands. We are confident that improved tax incentives, stricter emission regulations, and the introduction of EVs with more range will further improve market conditions in the months ahead.

In the next few months deliveries will start of the new Renault ZOE and the new Volkswagen e-Golf. Next year, completely new long range EVs like the Opel Ampera-e and the Tesla Model 3 are expected. Furthermore, from January 1st 2017, the tax regime for full electric vehicles improves dramatically relative to cars with combustion engines (including PHEVs)."

There was also some drawbacks noted in the quarter as one might expect placing modern fast charging station near those old school gas stations.   One of Fastned's stations was impaired by fire at a petrol station (De Andel), which (obviously) caused the charging station to be temporarily inaccessible.

Not noted in the company's press release/handy charts was profitability - a common problem amongst public fast charging providers while EV technology is in its infancy.