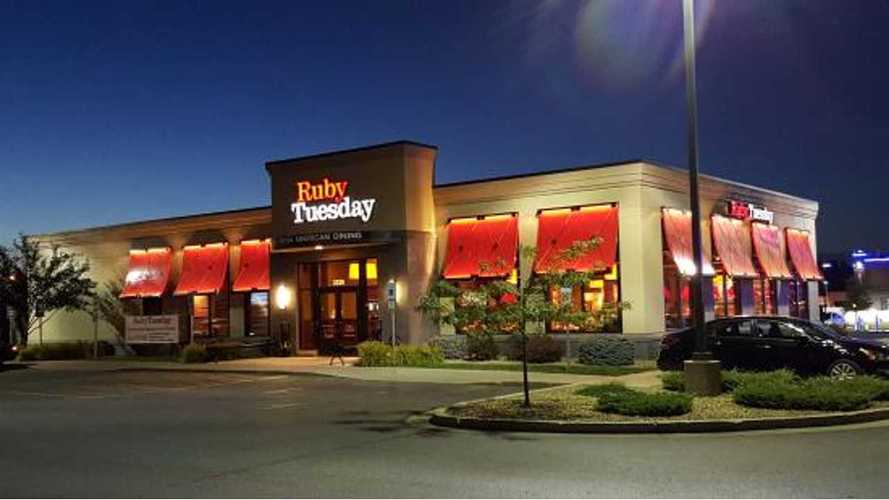 Tesla has made a deal with popular U.S. restaurant chain, Ruby Tuesday, to install Tesla Superchargers in the restaurant parking lots. The number of locations has not yet been announced, but the potential is huge as RT has 729 restaurants in 44 states, 13 foreign countries, and Guam (as of March 2016).

It was said that a "series of" Tesla Supercharger stations will be built at various locations, with the first Ruby Tuesday restaurant in Miner, Missouri getting the first operational Supercharger installation last month (location details here).  Other stations are currently  "in the planning stages or under construction".

“We’re thrilled to partner with Tesla Motors to offer our guests a place where they can charge their Tesla vehicle while enjoying a delicious meal,” stated David Skena, chief marketing officer of Ruby Tuesday.

The goal is to chose prime locations throughout the country's roadways that will allow travelers to "fuel up" conveniently.

“Expanding the Supercharger network to include Ruby Tuesday is good for both Tesla owners and our restaurants alike. We look forward to deepening our relationship with Tesla and opening additional Supercharger Stations in Ruby Tuesday markets around the country in the near future.”

Superchargers are strategically placed to allow owners to drive from station to station with minimal stops. Superchargers allow Tesla drivers to travel up to 270 miles, take a dining break at Ruby Tuesday and get back on the road at full charge. The Tesla Supercharger is substantially more powerful than any existing charging technology, providing up to 120 kilowatts of power and replenishing up to 170 miles of range in 30 minutes.

Currently, most all Tesla owners can use Superchargers free of charge. However, after the huge reservations for the upcoming Model 3, it seems that in the future, some owners of the new, affordable Tesla will have to pay to have the service activated (or possibly via a charging package/pay-per-use program of some sort).