BMW Exec: BEVS And FCEVs Will Co-Exist In The Future - PHEVs Will Disappear 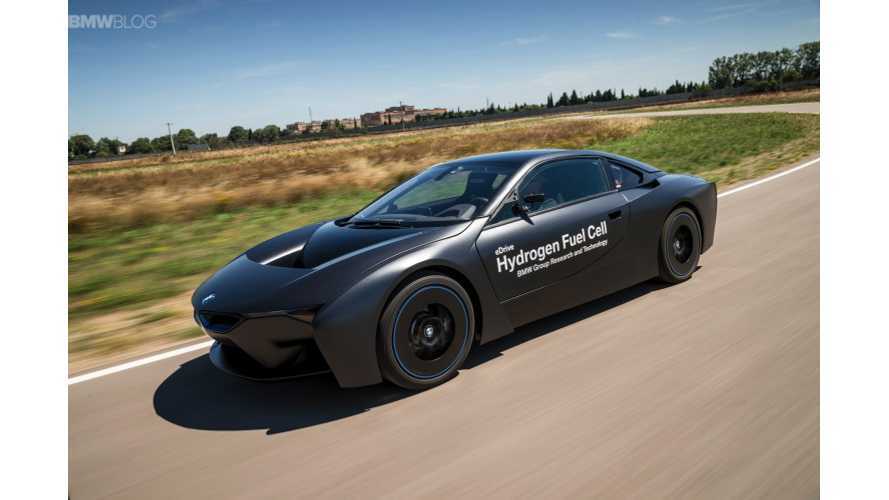 The reason for this opinion is that Merten focuses on the quick refueling time that is a key feature with fuel cell technology. He admits that there is a substantial hold up in infrastructure that is impeding hydrogen-powered vehicles, but work is in progress. Fortunately, current gas stations can be switched over to hydrogen stations. Weight is also an issue that is being addressed through the use of carbon fiber.

EVs and hydrogen cars will seem identical to the driver behind the wheel. There are many similarities. Merten explained:

"The basic idea is that you take an EV with a large battery pack, and you replace the pack with a fuel cell, a hydrogen tank, and a smaller battery. From there on the drivetrain is identical; the electric motor, the electronics, the gearbox, it’s all the same. And they have the same driving experience, too."

Vehicle size will become the deciding point between the necessity of a build being a BEV or a FCEV. The larger vehicles will be more suited to fuel cell technology, because a tank size increase makes more sense than a heavier, more costly battery pack.

BMW is currently teaming with Toyota on the hydrogen drivetrain venture. Merten explained that BMW would be investing regardless of the partnership, however, due to costs it makes much more sense to work together. He said:

"There are currently no suppliers who can deliver a turn-key hydrogen drivetrain for a car, so the knowledge lies in the hands of OEMs."

"Any time you roll out a new technology it takes a while for it to become profitable and affordable; in the end it has to be, though."

The goal is that by 2020, BMW will have second-gen hydrogen powered components ready for a new round of pilot program prototypes. The first program impressed users as the cars drove well and mimicked EVs, but lighter and sportier options were requested.

In terms of the initial potential markets, Merten specified:

"We are probably going to start in Japan. In the United States we’ll start with California, and in Europe we’re mainly looking at Germany, Scandinavian nations, and the United Kingdom."

He also noted increasing interest in China, with pilot programs using hydrogen-powered buses. The Chinese market is enormous, so the hope is that it will catch on there soon.

To read the entire interview, click the link below.