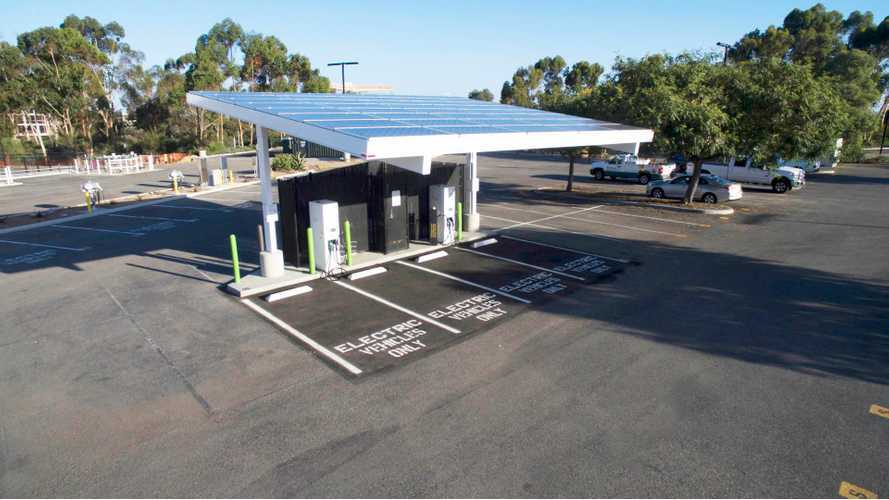 The station reminds us of a traditional gas station, but of course with no liquid fuel pump there.

Instead, two DC fast chargers for both CCS Combo and CHAdeMO charging (50 kW each) are present, as well as a AC charging station, solar roof and on site energy storage system - consisting of used batteries from BMW i3 electric cars.

According to press release, over 100 drivers are using the station every week, which translates of course to some ~15 per day.

This award-winning station is a precursor to the install of America's first ~350 kW super-station, which EVgo is presently constructing in Baker, California.  This 350 kW station also has a solar canopy, a battery back-up/storage system, as well as both CHAdeMO and CCS Combo connections.

EVgo statement in the win:

"A pioneering program in lowering the cost and immediate power demand of EV charging to host facilities, the EVgo SSPEC project explores how incorporating energy storage along with DC Fast Charging infrastructure can reduce the overall costs to public stations in order to make charging more accessible to EV owners. The SSPEC site is a model for future public charging facilities thanks to its use of four second-life batteries pulled straight from the BMW Group’s retired test fleet of electric vehicles, along with its use of solar power generation and intelligent site power control."

"For the SSPEC project, EVgo partnered with the University of California San Diego, which is recognized as one of the top 15 research universities worldwide and operates what is considered one of the world’s most advanced microgrids. EVgo worked with UC San Diego to locate a demonstration site on the campus microgrid that would also ensure the stations would be accessible to the public and which results in the chargers serving over 100 drivers per week. The project is part of the CPUC Technology Demonstration Program, a program designed to help demonstrate the benefits of energy storage coupled with public DC Fast Charging stations.

The EVgo SSPEC system leverages a total of four second-life battery packs to provide energy storage services at the site. Local site controls then dispatch the batteries to provide services when vehicles arrive to charge at the site. With the system’s solar charging integration, customer vehicles charge directly from solar energy generated on site, and the batteries are used to reduce the grid’s electricity consumption, effectively offsetting demand charges and helping to manage the operational cost of providing public charging services."

“DC Fast Charging plus storage presents an exciting opportunity for drivers and charging companies alike. This project has the potential to shortcut some of the barriers facilities face when looking to install DC Fast Charging stations by reducing operating costs, improving charging service and convenience for EV drivers, and ultimately can help to put more electric vehicles on the road,”