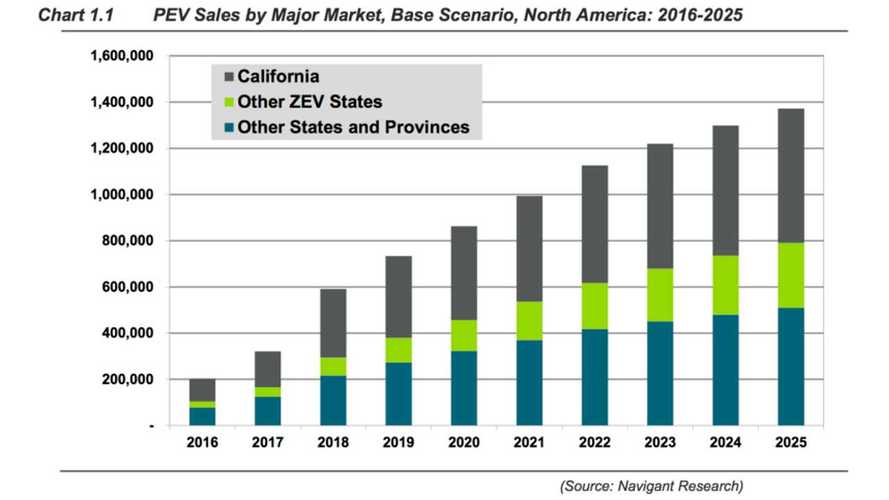 Navigant Research predicts that plug-in electric vehicle (PEV) sales in the US and Canada in 2016 will come close to 200,000 units. If achieved, sales will have grown by 62% year-over-year for the region.

About the numbers/estimates for 2015 by Navigant:

Through June, EV sales have indeed been stronger in the US with ~64,000 plug-ins sold after six months (full monthly US EV sales scorecard can be found here).  And the good news is that plug-in sales are forecasted to be stronger still in the second half; but there is no escaping that the YTD percent increase over 2015 (when 54,347 were sold in H1) currently stands at 18%.  A solid showing, but not the 57% required.

In other words, it just isn't going to happen.  Working very optimistically, you could perhaps pencil in 18,000 for Canada, and a further 14,750 per month on average in the US for the last six months, which would net North America just past 170,000 - for a gain of about 38%.

Navigant says that much of the growth in the next few years will come from vehicles such as the Tesla Model X, Chevrolet Volt, Chevrolet Bolt, Prius Prime, Chrysler Pacifica PHEV and the Mitsubishi Outlander PHEV. Looking further into the future, Navigant predicts that the:

"introduction of the Tesla Model 3 in late 2017 will likely boost the market by about 60% in 2017 and then nearly double the market in 2018 as the first full year of Model 3 sales is achieved."

Again, see chart above to see impact of Model 3.

“The long-range BEV under $40,000 is a marked achievement in the industry. This development is expected to significantly increase PEV adoption past the 1 percent penetration rate it has struggled to surpass in all but a few markets.”

While PEV sales have been concentrated on the U.S. West Coast, adoption in Northeastern states is expected to increase

During the next few years, significant growth is expected in the North American PEV market. In 2016, growth will be driven by sales of the Tesla Model X, the second-generation Volt, and by the introductions of the Chevrolet Bolt 200-mile range battery electric vehicle (BEV), the Prius Prime plug-in hybrid electric vehicle (PHEV), and the Mitsubishi Outlander PHEV later in the year. Click to tweet: According to a new report from @NavigantRSRCH, the North American PEV market in 2016 is expected to grow by around 62 percent year-over-year, nearing 200,000 sales.

“The long-range BEV under $40,000 is a marked achievement in the industry,” says Scott Shepard, senior research analyst. “This development is expected to significantly increase PEV adoption past the 1 percent penetration rate it has struggled to surpass in all but a few markets.”

Since the PEV market launched in 2011, sales have been concentrated on the U.S. West Coast, but a group of eight Northeastern states is likely to see PEV sales increase considerably as automakers stress BEV deployments and marketing efforts to comply with the region’s mandates for PEV production. According to the report, PEV preferences vary significantly by U.S. region, and consumers in the Northeast appear to demand significantly higher vehicle capabilities and range requirements.

The report, Electric Vehicle Geographic Forecasts, provides an update to the model results published in Navigant Research’s Electric Vehicle Market Forecast report, with a specific focus on North America. The study assesses PEV sales and populations in the United States and Canada and provides detailed geographic breakdowns of PEV sales by U.S. state, core based statistical area (CBSA), Canadian province, and Canadian census metropolitan area (CMA). Forecasts are provided under three scenario conditions (conservative, base, and aggressive), alongside results from Navigant Research’s annual Electric Vehicle Consumer Survey. An Executive Summary of the report is available for free download on the Navigant Research website.