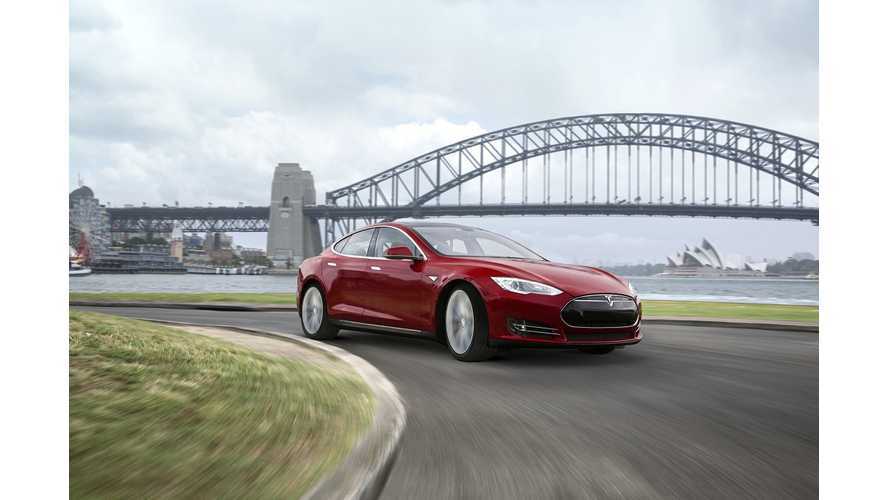 Tesla's new 5,000 square foot flagship is now open in Sydney, Australia. The store is complete with three Model S displays as well as a battery chassis with suspension, powertrain, and wheels, for up close viewing.

Note: A full gallery of images of the new shop can be found at Gizmodo here.

The store is in a prime location, in the city center, adjacent to a busy, outdoor pedestrian mall. Somewhat ironically, it is right next door to Apple's corporate office. This is the third Tesla retail store in OZ. The others are located on Sydney's North Shore and in Melbourne.

Tesla Gear can be purchased near the entrance of the store, next to a High Power Wall Connector (HPWC). A Tesla Powerwall is also on display near the back of the store. Unfortunately, no "live" chargers or Superchargers are available for owners to utilize at this location.

Beneath the store is a parking lot area that is planned to be used for test drives. Once the Model X arrives in OZ, reportedly prior to the end of this year, the showroom will be reconfigured.

One hundred destination chargers have been opened throughout the country and seventy-five more will open before the close of the year. Australian Tesla drivers have logged savings of 700,000 liters (185,000 gallons) of gas after driving over 9 million kilometers (5.6 million miles).