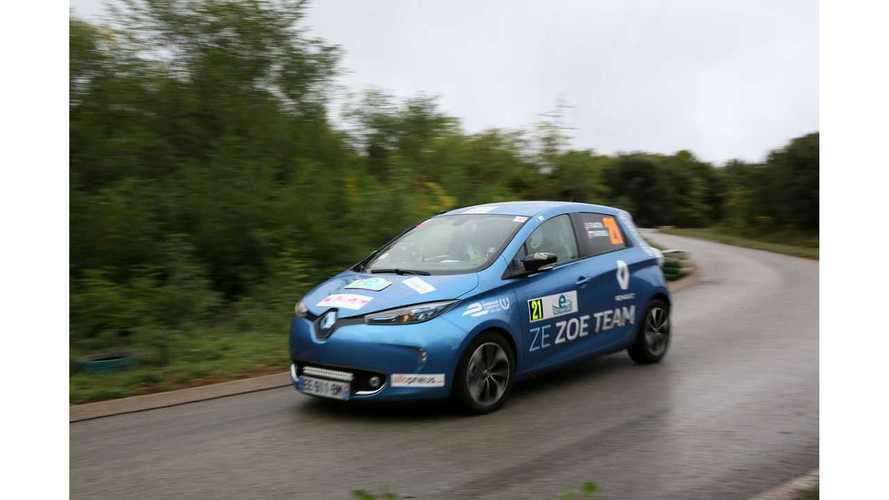 But surprisingly, a Toyota Mirai appeared on the scene and won the overall event standing ahead of the new ZOEs.  So for this year, Renault has to be satisfied with a best result in the all-electric vehicle class.

The ZOE: number one in motorsport and for everyday use:

Following back-to-back victories on the Rallye Monte-Carlo ZENN (Zero Emissions, No Noise) organised by the ACM (Automobile Club de Monaco) in 2014 and 2015, Renault decided to defend its record on this unique event this time around. For 2016, the competition was renamed the e-Rallye Monte-Carlo and featured classes for all types of energy (all-electric, hybrid, fuel cell, etc.), with the exception of 100-percent fossil fuels.

At the recent Paris Motor Show, Renault – an electric vehicle pioneer and the number one EV seller in Europe for the past four years – revealed that it has doubled the driving range of the ZOE. The top-selling model, a favourite with families and businesses alike, now boasts an NEDC range of 400 kilometres, equivalent to a real-world range of approximately 300 kilometres and a performance that allows users to put charging-related concerns to the back of their mind. Orders are already open for ZOEs equipped with the new Z.E.40 battery and deliveries are due to begin before the end of the year. Taking part in the e-Rallye Monte-Carlo was consequently an entirely logical decision.

Renault Press Blast on the 2016 e-Rallye

The 2016 e-Rallye Monte-Carlo (October 12-16) started in Fontainebleau, near Paris, France, and ended in Monaco.

The entry list featured 34 crews who represented most of the manufacturers active in the market.

Meanwhile, Adriana Karembeu was part of the all-lady crew in the N°2 ZOE. With previous participations on the Rallye des Princesses and the Rallye des Gazelles to her name, the French model, actress and TV presenter is no stranger to motorsport. She also shares the values championed by Renault and, throughout the e-Rallye Monte-Carlo, was her usual vibrant and charming self, always happy to take time to chat with her many fans.

At the end of the four-day competition, which packed its fair share of surprises and drama (including a power cut across the whole of one town, punctures, torrential rain and night-time action until four o’clock in the morning), the ZOE not only topped the final order in the all-electric vehicle class but also claimed second and third places overall. Third spot went to the Renault squad’s two bloggers in a car equipped with the new Z.E. 40 battery, while runner-up honours were bagged by privateers Christophe PONSET / Serge PASTOR whose ZOE was powered by a battery with a range of 240km, proof of the ZOE’s capabilities irrespective of generation.

“The level of the entry was much higher this year. The status of the e-Rallye Monte-Carlo is growing fast and the organisers served us with a genuinely challenging event. Our ZOE was equipped with the new Z.E. 40 battery and we were able to cross France without having to worry about running out of power.

We prepared carefully and, with road sections of up to 240 kilometres in length, we obviously had our eyes on the satnav, but never on the battery gauge. Renault has sparked a revolution in the world of affordable electric cars and we completed the rally ahead of models like the BMW i3, the Kia Soul, the Volkswagen E-Golf and even the Tesla S! We could have exceeded distances of 340km during the rally and I am certain we could even exceed 400km in real-world use. That’s my personal challenge!”