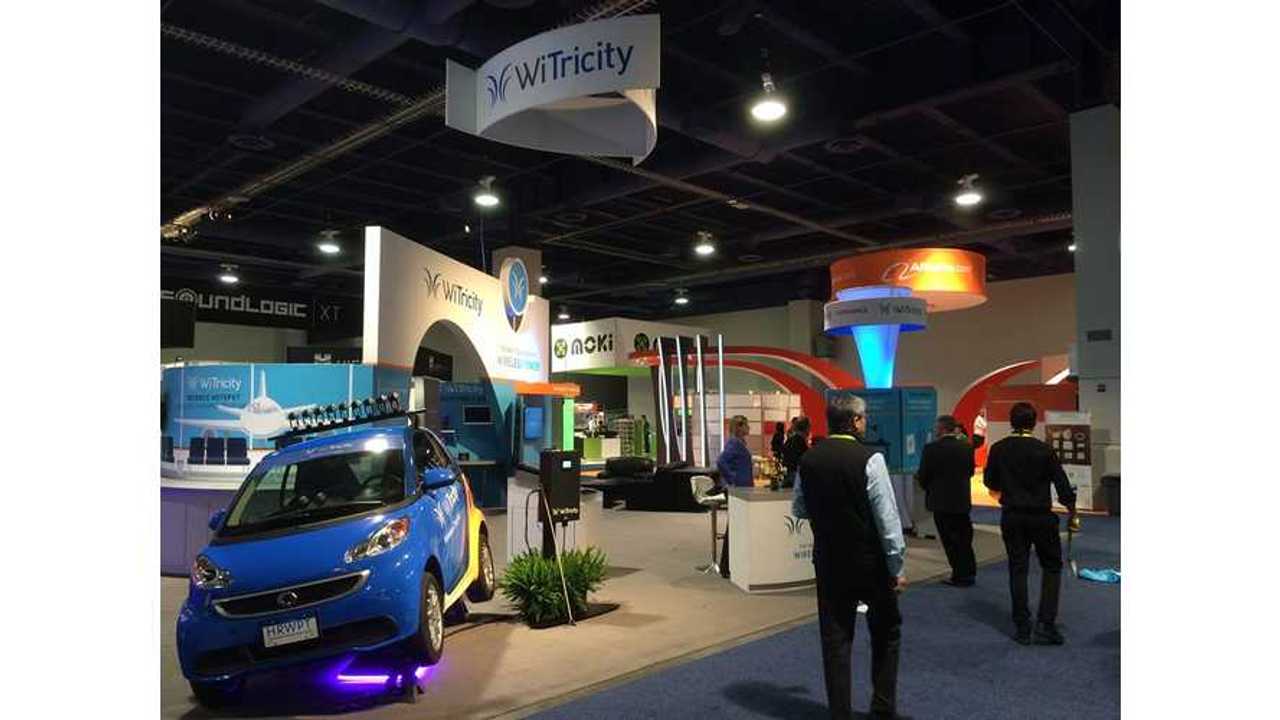 Better still, the efficiency is stated to be between 91 to 94%.

According to WiTricity (which also has developed 3.7 and 7.7 kW systems), the magnetic resonance technology can be scaled up to 25 kW and more if future EVs require higher power.

As of today WiTricity still is tight lipped about the first EVs which could use its 11 kW system, other than they will arrive in 2017.

The system leverages WiTricity's magnetic resonance technology to deliver a range of power over distance and through materials -- enabling transfer of up to 11 kW, with the ability to scale to 25 kW and higher for next generation automobiles with higher power requirements. WiTricity successfully completed testing and validation of a 7.7 kW version of the new system last week, under a testing program sponsored by the Society of Automotive Engineers (SAE) wireless power transfer task force, at the U.S. Department of Energy’s Idaho National Laboratory. The WiTricity designed and built system was submitted in cooperation with Nissan, the world’s leading supplier of electric vehicles.

The first wirelessly-charged vehicles will hit the market in 2017, with additional models following in each year. For mass adoption of EVs, carmakers realize that wireless charging systems must be interoperable across brands, so any EV can charge wirelessly at home and at public charging spots. Interoperability requires standardization, and WiTricity is guiding international standards efforts through its leadership and participation in industry groups including the SAE (Global), IEC/ISO (Global), DKE (Germany) and CATARC (China). The new high-performance WiTricity system is designed to offer the utmost in interoperability, working across vehicle brands and vehicle types ranging from sports cars and sedans to SUVs, including all-electric and PHEV platforms.

While Nissan has yet to confirm it...you can bet the next generation LEAF will also feature wireless charging in 2017

WiTricity's new system works at 3.7 kW, 7.7 kW and 11 kW, providing carmakers with solutions for their full range of vehicles, and has the capability to scale to higher power levels as needed for future EV models. The charger can be deployed as a “floor pad” in a consumer’s garage, and can be installed below the surface of the pavement to provide wireless charging in public and commercial parking lots. The system operates at very high efficiency of 91 to 94 percent, superior to many wired charging systems that are now on the market. Incorporating WiTricity’s breakthrough TMN™ technology, the system offers unmatched efficiency, flexibility and interoperability."

"WiTricity is working with major automakers and Tier 1 suppliers to bring the next-generation of wireless EV charging to a commercial reality. Licensing agreements have been announced with Toyota, Delphi, TDK, IHI and BRUSA. The company is also collaborating directly with leading carmakers to drive global standards for wireless charging systems."

"We're thrilled to be announcing this new system and proud to assume the mantle of high-power charging leader. Having engaged with the automakers to comprehend their key requirements, I'm confident in the huge impact WiTricity can deliver for the industry and consumers. EVs have the potential to change transportation in a massive way and simplifying the charging experience is foundational to broad driver adoption. This system will help drivers get power conveniently and efficiently without having to think of plugging in."