Lux Research: Battery Market for Plug-in Vehicles to Rise to $10 Billion in 2020 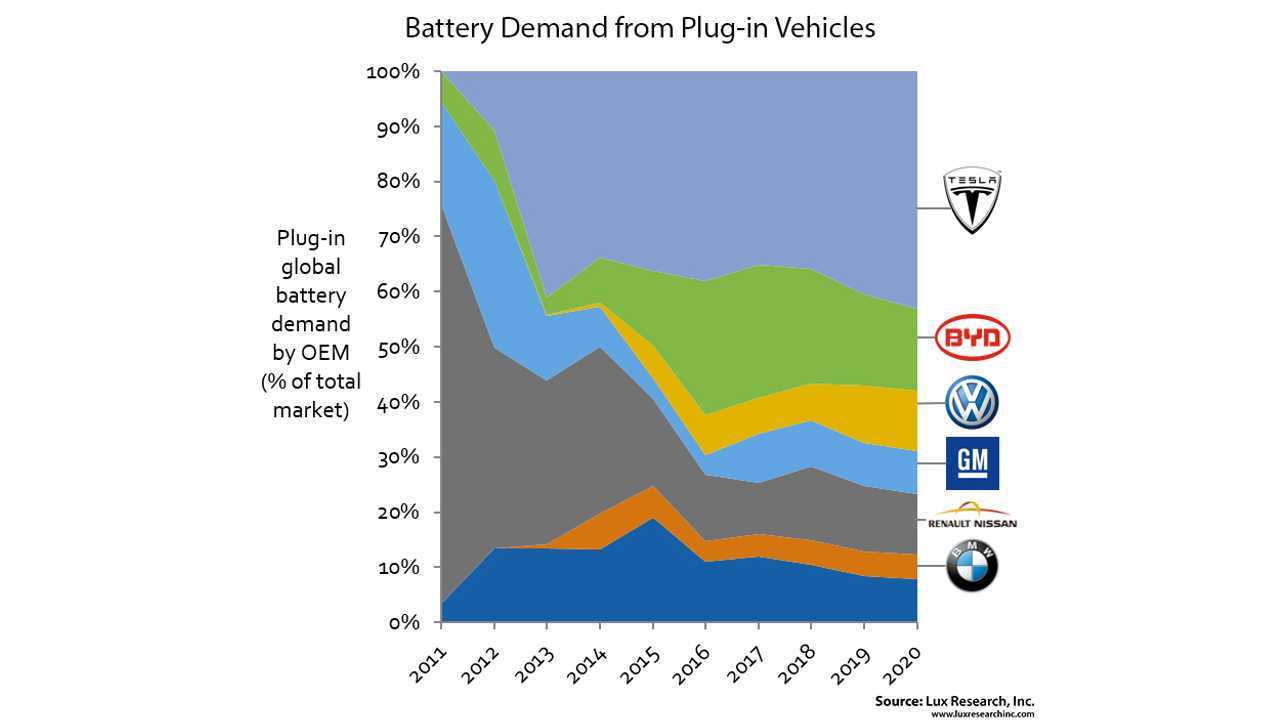 Of note, about 90% of the plug-in car sales are forecast to come from six automotive manufactures: Tesla (between 30 to 40% of the market), BYD, Volkswagen, GM, Renault-Nissan and BMW.

Looking at the chart, and also watching the segment first hand (as well as being privy to some future plans at a couple of those companies), we can tell you with a very high degree of confidence, that the 'percentage' slices given to BYD, Nissan (and maybe VW is you trust in their own estimates) in 2020 are way too small.

Most of needed batteries in the future are said to be supplied by Panasonic (46%) - we believe in this case that the Panasonic numbers include Tesla Gigafactory production. The next largest suppliers after Panasonic/Telsa?   BYD, LG Chem, Nissan/NEC and Samsung SDI.

80% of lithium-ion batteries to be used in all-electric cars, while 20% make up the remainder in PHEVs.

"Six large carmakers led by Tesla will account for 90% of the demand, while Panasonic will remain the world’s biggest battery maker, Lux Research says

BOSTON, MA – June 28, 2016 – Led by Tesla, China’s BYD, and Volkswagen, the battery market for plug-in vehicles will rise to $10 billion in 2020, with electric vehicles (EV) emerging as the drivetrain of choice, according to Lux Research.

Just six large carmakers will account for 90% of the battery demand: Tesla, BYD, Volkswagen, General Motors (GM), Renault-Nissan and BMW. Among battery-makers, Panasonic will keep its lead with 46% market share, followed by BYD, LG Chem, NEC, Samsung SDI and others.

“Plug-in adoption is ultimately being fueled by rapidly decreasing battery costs and the success of early EVs such as Tesla’s Model S and Nissan’s Leaf, which has forced a number of other OEMs to make more serious commitments to developing plug-in vehicles,” said Chris Robinson, Lux Research Associate and lead author of the report titled, “Segmenting the $10 Billion Battery Market for Plug-in Vehicles: Market Share Projections for OEMs, Individual Models, and Suppliers.”

“Consumers will soon be able to purchase electric vehicles with 200 miles of range for less than $40,000, almost half the price of the long range EVs available today,” he added.

Lux Research forecasted the market for about 90 plug-ins and fuel cell vehicles (FCVs) and identified implications for the energy storage industry. Among their findings: