When auto-pilot was officially launched in Hong Kong last October, many owners with auto-pilot feature couldn't wait to try out this amazing technology.

Sadly,  less than 100 Model S out of the 2700+ on the road at the time managed to perform the update to experience it on local roads before the Transport Department gave out the red card to have Tesla disabled the feature over the air.

Owners felt like they were hit by a lightening to be sent back to 1885 with Dr. Brown having to maneuver their cars again on a railroad track in front of a steam train.  But with the help of Marty McFly (Elon Musk) traveling back in time speaking in with local Sheriff (Local Government Official) in person things were back on track with the Tesla team working together with local Transport Department to send us all back to March 14, 2016.

Now, Hong Kong owners have gotten their auto-pilot feature back with auto-steer after installing the latest update Version 7.1 (2.14.17).  There was only a slight hiccup for those owners who got the feature disabled last year, as the auto-pilot button was still greyed out after the update. We suspect a BLACKLIST of VIN numbers used to disable the feature by OTA had not been removed. Owners confirmed to us that this has been resolved the next day.

This has been great example of technology companies working with local regulatory authority to bring the latest innovation to market that will improve our daily lives. Big hands to everyone involved in getting the auto-pilot finally approved. I am sure fans and owners want to see Summon get approved for local use as well.

Dr Brown.....We still cannot buy plutonium at a convenient store in 2016, but we sure can get Auto-Pilot feature wherever Tesla is being sold. Hong Kong was the last location out of the markets where Tesla is sold to get approval for auto-pilot after Japan got approval for the functionality in January. 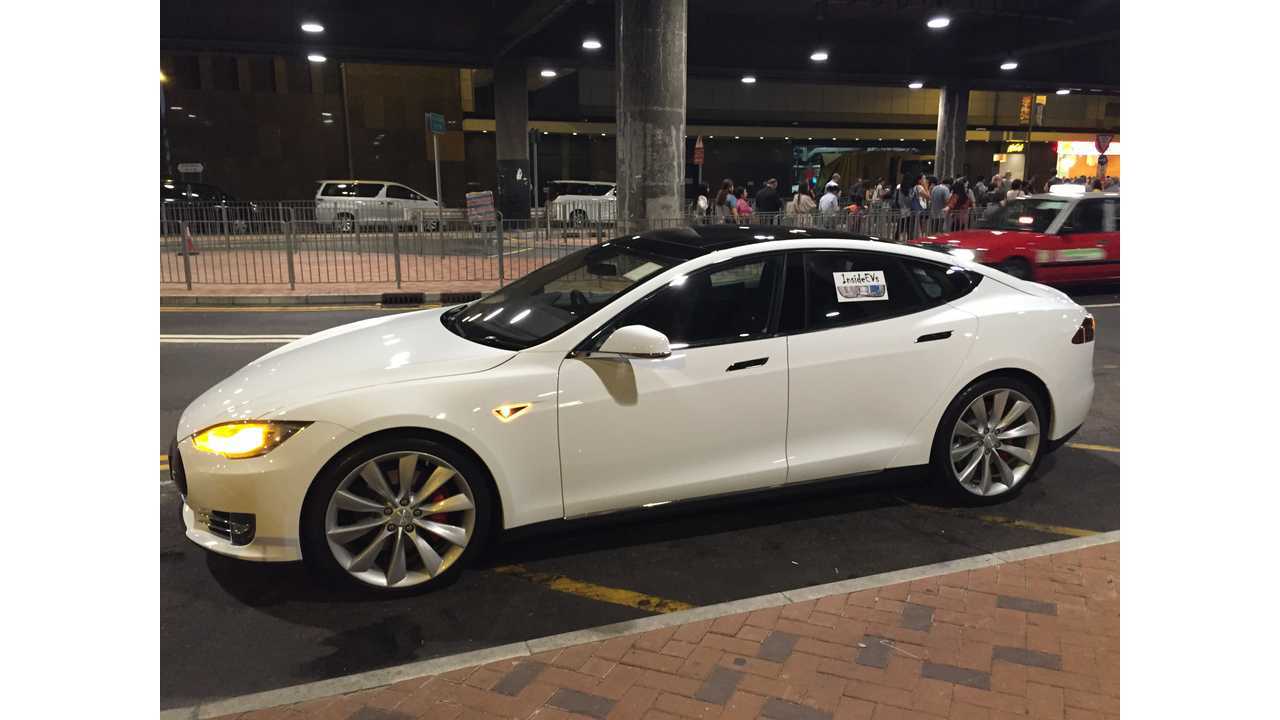 I also had a chance to experience the latest version of auto-pilot on Hong Kong island roads.

It seems while driving through most of the South and Western part of the island, the auto-pilot could not be enabled even with multiple lane straight highway like roads. It feels almost as if it has been program to restrict auto-pilot on specific roads.

Once I have reach the northern part of the island driving onto the eastern corridor (4 to 5 lanes highway with speed limit of 70km/hr) the 'steering wheel icon' finally showed up on my dashboard for enabling auto-pilot.
I could immediately feel this version has improved, as the car was positioned quite center within the lane, and steering along curves is noticeably smoother than the experience I had back in Oct 2015. I found there is a slight delay with lane changing, even without any vehicles following me in the adjacent lane.
I also had a chance to test it through the two lane, single direction Aberdeen tunnel (a tunnel that joins the northern and southern part of the Hong Kong island) while experiencing a slow moving traffic jam at a speed between 35km/hr to 50km/hr. The car successfully managed the drive through the entire tunnel.

Auto-Pilot enabled while following a double deck bus, even though the system shows the truck icon instead of a bus on the dashboard

We hope the next generation of auto-pilot system will handle the busy, crowded and narrow cities streets that is so common in Hong Kong.