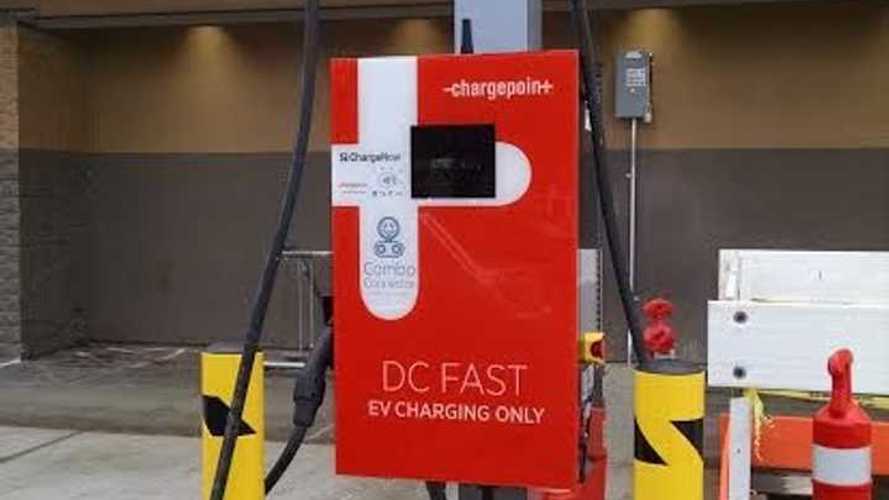 In late 2015, Fred Meyer stores in Oregon began installing ChargePoint 24kW DC fast chargers with CCS plugs. A worker associated with the project, but not authorized to speak publicly, indicated that chargers are currently being installed at Albany, Roseburg, Grants Pass, Medford, South Medford and Klamath Falls. The worker also indicated that this project has the corporate backing of the CEO, and that nearly all Fred Meyer stores in Oregon will eventually have chargers installed, though some locations in cities with multiple stores will be among the last to have chargers installed.

At the Albany, Oregon store, one CCS charger is installed and operational as of January 1, and the site is pre-wired to support two additional chargers at a future date once customer demand warrants the installation of additional plugs.

At that same time, the ChargePoint app also indicated that Roseburg and South Medford are operational, and Grants Pass appears online about a week later.

Pricing is presently $0.15 per kWh “all day.” One wonders if pricing structures might roll out in the future to adjust demand during hours of peak usage. Unlike other QCDC stations, Fred Meyer stations presently do not charge for parking, or time plugged in. Described as providing 100 miles range per hour, quick charging a BMW i3 to 80% would cost less than $2.70 and could be expected to take less than 45 minutes.

The CCS chargers are currently marketed on ChargePoint as being compatible with BMW i3 and VW Golf. The Spark EV has optional CCS fast charging and photos of the recently debuted Chevrolet Bolt indicate it will utilize CCS fast charging.

Looking to the future, what might the Fred Meyer “network” of fast chargers look like? See the map of Fred Meyer locations in Oregon to envision where the “West Coast CCS Highways” (not an official name) could be built out.

The map illustrates that Fred Meyer stores in Oregon are primarily located on three north-south corridors: Highway 101 on the Oregon Coast, Interstate 5 in the western inland valleys and Highway 97 on the east flank of the Cascade Range. Of the three, the Highway 97 corridor is would only be passable with a 200+ mile EV, if relying solely on Fred Meyer CCS chargers, and presuming that all stores eventually have chargers installed.

As a side note… Update on Northern California

The EV charging scene in Northern California is improving (for all those not driving Tesla’s), thanks to Carl’s Jr restaurants deploying 24 kW DC fast chargers, with CCS plugs, in Williams, Yreka and Redding, CA.

These chargers are on the ChargePoint network and all three charge $0.14/minute for station parking and an energy charge of $0.25/kWh.

With a first generation EV, the 80 mile jump from Yreka to Redding is difficult, but the 100 mile jump from Redding to Williams is nearly impossible until second generation EVs begin arriving in late 2016. For now, any EV driver not in a Tesla, or a BMW i3 Rex, will still find it difficult to cross the expanse between Sacramento, CA and Ashland, Oregon.

As far as CHAdeMO fast charging, there’s still a 203-mile gap between Chico, CA Nissan and Ashland, OR. Additionally, the climb to the 4310’ elevation Siskiyou Summit is achieved just 10 miles before reaching Ashland, and this author estimates the power requirement at close to 250 miles of range.