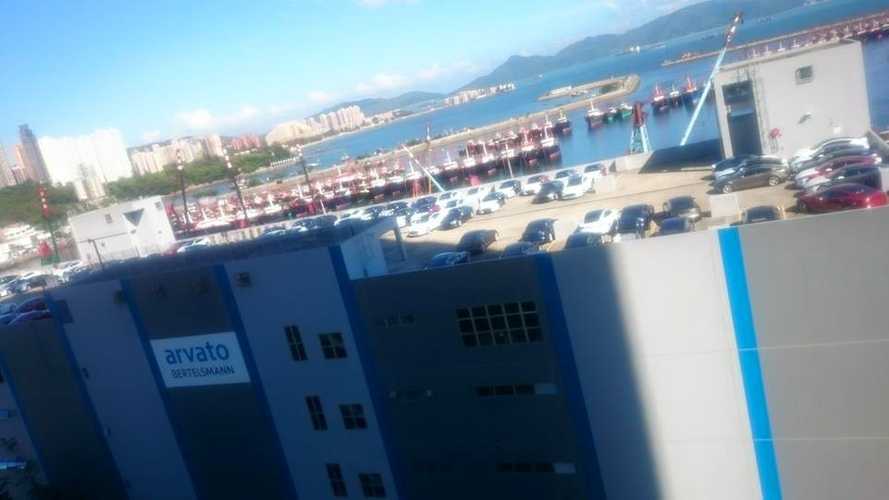 Tesla has always been rather tight lipped with it sales figures, especially units sold in certain markets. However, this photo should give us some idea of the sales volume in Hong Kong. A large number of brand new Model S EVs were spotted on a warehouse roof top in Hong Kong.

As you can probably estimate from the photo there are at least 50 or more units parked on that roof.

Here is some more background on Model S sales in Hong Kong.

All Model S (and upcoming X ,where unconfirmed reports estimate 300+ prepaid deposit customers) are built to order (unlike other non-direct sales dealerships that carry stock) with a waiting time reported by recent/future owners from a month to 9 months plus, depending on the model and configuration. There are rare occasions when a buyer forfeits their deposit as the car arrives for pick up, allowing other eager customers an option to immediately purchase the unit. In recent weeks, there were a few new Tesla owners posting on a local forum discussing about getting hold of what they called "stock units" of the 85 model within a short time frame as they ran out of patience waiting for the D models expected to arrive in August.

Some members from the local EV group ChargedHK estimate there are approx 1,300+ Model S on the roads Of Hong Kong since the first delivery in July 2014 (calculated by subtracting other manufacturers reported EV figures). The latest government figures reported by the Environmental Protection Department's website shows there are a total of 2,246 EV registered in HK at the end of May 2015, compared to 2116 at the end of April a month earlier (there were less than 100 at the end of 2010). It is very likely that large percentage of those new EVs reported in May are Model S EVs rolling out from the same roof top.