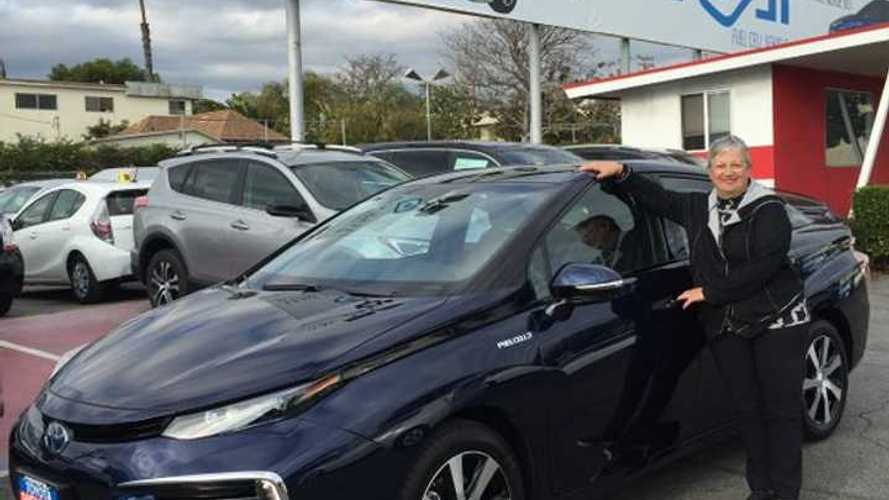 It is no secret that we can thank the California Air Resources Board for the bulk of the advancements in the alternative fuel segment in the United States, and to some degree the rest of the world as well.

Willing to take a stand where other government agencies and associations would not, the majority of the success of the plug-in vehicle segment in the US can be attributed to CARB...and its Chairperson Mary Nichols.

This Is Who You Want Running The Show At CARB

At the same time, we have noted that CARB is as committed to fuel cell vehicle technology as much, if not more than plug-in technology (especially if you go by the rebate incentive dollars, the demographic of people who can receive them and the eligible ZEV credits), and at times we have wondered why.

Now we know, she loves the tech.

Every Sunday, Ms. Nichols picks up her young grandson and takes him for a spin to her favorite refueling station in west LA to top-up her fuel cell Toyota Mirai according to a recent featurette in Los Angeles Magazine.

Ok, maybe we are being a little tongue-and-cheek with the reason fuel cell technology apparently gets so much love in California, but the story on Ms. Nichols' support of alternate tech, and her commitment to promoting it even after hours is still a good one as she champions the cause for EV and fuel cell vehicles alike.

"He loves to watch his grandma fuel up her brand new Toyota Mirai hydrogen fuel cell electric vehicle (FCEV) and Nichols loves that she doesn’t have to expose her grandson to noxious gasoline odors."

Sometimes it's ok to be hands off! @TeslaMotors #ModelX is a beautiful, comfortable, exhilarating ride. pic.twitter.com/XezI96doqq

The magazine asked her a couple questions behind her purchase of the Mirai as she refueled her car in front of a waiting a Mercedes F-Cell - pretty rare occurrence these days.

On why she bought a Mirai:

"Someone told me I should put my money where my mouth is. This isn’t my first clean vehicle, as I also own a Honda FIT electric vehicle that I love. But it is certainly the most luxurious car I’ve ever owned. I really appreciate the sense of comfort I feel when I drive the car, the impressive safety features and I really love the color — maritime blue. That makes me happy."

On refueling the Mirai:

"The first time I tried it on my own, I have to admit that I had a little difficulty. Even though I was trained the first time I fueled up, I guess I wasn’t paying full attention, so when I returned on my own, I had to call the toll-free number listed on the dispenser. They can monitor the station in real time and the operator was able to detect that I hadn’t properly sealed the nozzle. They talked me through what I needed to do and a few minutes later, I was all fueled up."

On others buying a fuel cell as opposed to an electric:

"As you can imagine, I’m a fan of all zero emission vehicles. While many electric vehicles are great for most driving needs — and they’re getting more affordable and better range all the time — sometimes you need a vehicle that has more range. Occasionally I have to travel to El Monte or Riverside and it’s perfect for that. I would caution any prospective drivers that there are only a few local fueling stations open right now, but by the end of the year there will be close to 50 stations operating. I’m thinking about testing out the fueling network by driving my Mirai to Sacramento."

Check out the full interview for more background into Mary Nichols, and fuel cell technology at Los Angeles Magazine here.