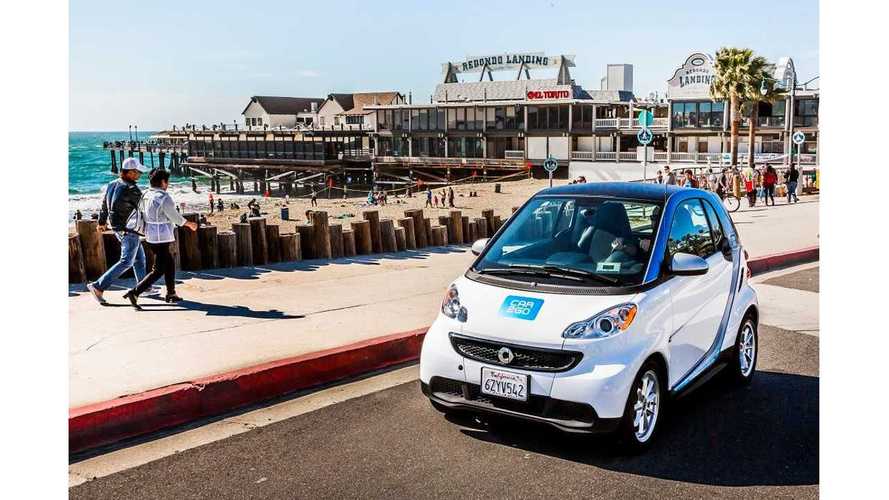 It was late 2011 when Daimler's car2go launched in San Diego - the all-electric car sharing rental in North America.

But now soon the EV project will turn to ICE, due apparently to a scarce charging infrastructure.

Car2Go originally used 300 electric smarts (from an early pilot fleet developed and produced with Tesla - not the current generation sold by Daimler), and using charging infrastructure installed by ECOtality.

Well, as we know, ECOtality went bankrupt and never actually delivered the previously announced number of charging points (there is only 400 out of 1,000 planned), and the Car Charging Group that acquired ECOtality assets now also is bleeding with cash, and we don't know even know exactly what is happening as the quarterly reports are highly delayed.

Anyway, car2go was left with not a strong enough charging infrastructure, and new players comes to San Diego with their car sharing investments (for conventional propulsion).

Car2Go: We're just not able to keep the cars charged

Despite that in 2015 car2go switched from early Tesla smarts ED to new ones (and expanded the fleet to 400), produced by Daimler in France (without Tesla battery packs), the short answer/solve is to switch the rental from pure electric to pure gas and lower the pricing.

In San Diego, an average of 20 percent of Car2Go’s fleet is unavailable at any given time because the cars are either being charged or because they don’t have enough electricity in them to be driven."

One of the latest infrastructure projects, with 3,500 charging spots, announced by SDG&E will apparently not be quick enough or not focused enough on car sharing to keep electric car2go in the city.

"It's a lesson to all of us that we have to work harder to build the infrastructure necessary to support electric vehicles and other transportation modes,".

Nicole Capretz, a consultant who was the primary author of the city’s climate plan said:

"This is a step backward, so we have to regroup and figure out some new solutions,"

"What we expected as far as charging infrastructure versus what we were delivered just hasn't added up,"

"We're just not able to keep the cars charged, and people aren't able to charge them on their own. We're still committed to electric vehicles — it works in some of our cities in Europe where they have more robust charging infrastructure. We just don't have the infrastructure we need here to make it work now."

“We’re keeping the door open when it comes to an electric vehicle fleet,”