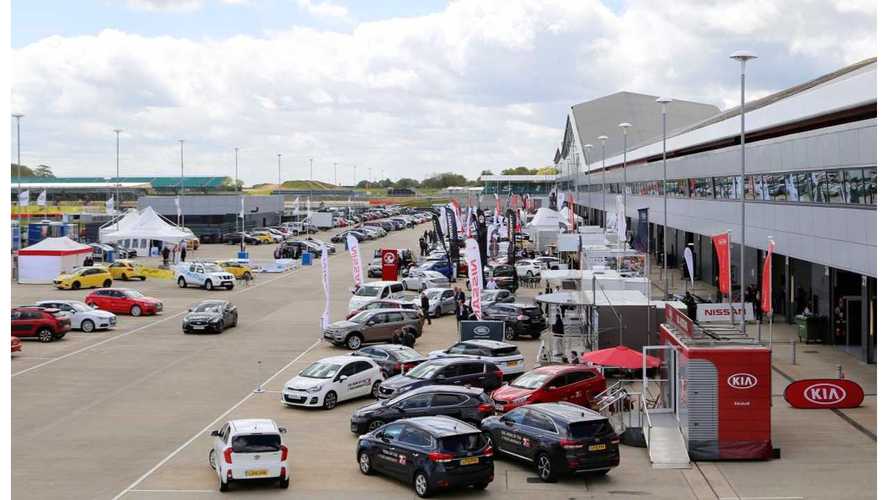 British fleet decision-makers will get a nice opportunity to see, evaluate or even drive currently offered plug-ins at the iconic Silverstone circuit in May, during the 2016 Fleet World Fleet Show.

Electrifying this segment of the automotive segment in the UK could trigger another sales rush.

"Go Ultra Low, which brings together a consortium of eight leading vehicle manufacturers (Audi, BMW, Kia, Mitsubishi, Nissan, Renault, Toyota and Volkswagen), the Office for Low Emission Vehicles and the SMMT, will again be holding a lunch-time seminar for fleet decision-makers, when there will be the opportunity to discuss some of the benefits and challenges to running a fleet of EVs."

"Behind the increased fleet demand is a much greater choice of models with 30 pure electric or plug-in hybrid cars now available in the UK. These range from high-performance sports cars to capable sports utility vehicles, with more new models on the way this year and with each of the 10 best-selling brands now offering an EV as part of their model range.

And, amongst Fleet Show exhibitors this year, BMW, Nissan, Renault, Tesla and Volvo will be just some of the vehicle manufacturers with a strong interest in boosting sales of EVs and range extenders to fleet customers.

As regular visitors have come to expect, the 2016 Fleet Show will include a huge array of interesting features for fleet decision-makers that will more than justify taking a day out of the office.

Dozens of vehicle manufacturers, leasing companies and other fleet suppliers have already confirmed their places at one of the UK’s largest fleet events, which again promises to provide something for everyone.

There will be test driving of more new cars on three circuits - the National, International and Stowe circuits - plus a road route, with an emphasis on some of the very latest alternatively-fuelled models, as well as more conventionally-powered vehicles.

The organisers are expecting test drives to again be very busy this year after driving at last year’s Show increased by 20%.

And, as well as test driving the newest models, the 2016 Show will again feature anindoor exhibition in halls 1-3 of the state-of-the-art Silverstone Wing, with a wide array of exhibitors demonstrating some of the latest developments, products and services in the fleet arena.

This will provide Show visitors with the chance to hold face-to-face meetings and network with exhibitors and other visitors alike.

Last year’s Fleet Show attracted higher numbers of top quality fleet decision-makers than ever before – up 25% on the previous year – and the audience has increased in size every year since the inaugural event in 2011.

This year, the audience will be audited by the Audit Bureau of Circulation (ABC) for the first time to give a clear and auditable record of the number of fleet decision-makers attending the event.

Registration for this year’s event is now open and details of how to register can be found here: http://thefleetshow.co.uk/visitors"

“We are delighted to be back at Silverstone again after a very successful Show last year. The Go Ultra Low campaign helps fleet decision-makers and company car drivers understand the benefits, cost savings and capabilities of the wide range of EVs on the market.

“It does this by educating both public and fleet audiences and addressing outdated myths and highlighting the multiple benefits of EVs, including how they offer competitive practicality for business users.”

“EVs, range extenders and ULEVs are now becoming an increasing part of the fleet mix and, as the latest sales figures show, in today’s extremely emissions-conscious fleet market these types of vehicle are of increasing importance.

“Some of the very latest ultra-low emission models will be available at Silverstone this year so that fleet decision-makers will have the perfect opportunity to assess them in a variety of different driving conditions,”