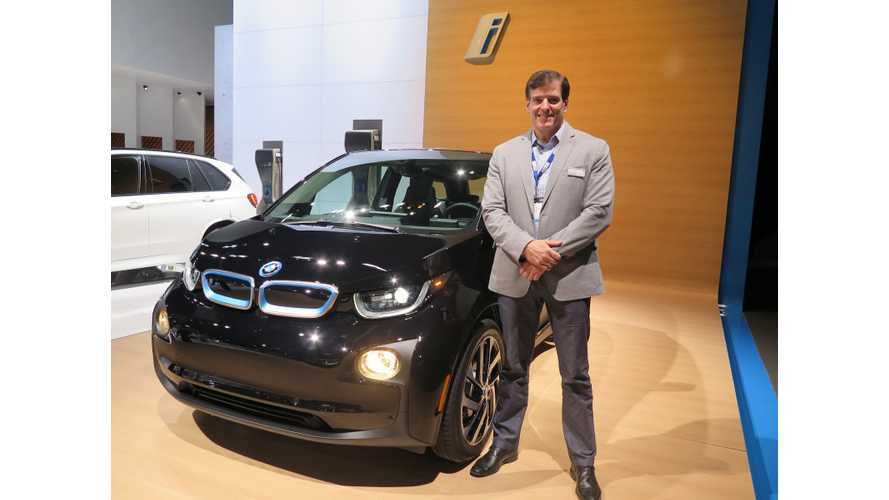 EVgo and BMW partner to bring ChargeNow DC Fast electric vehicle charging program to 25 cities nationwide. EVgo Network will have more than 600 50 kW DC Fast Combo chargers in next 2 years. BMW i3 drivers get 2 years free charging with the purchase of their vehicle (PRNewsFoto/EVgo)

A few weeks ago at the LA Auto Show, BMW made news by announcing a partnership with NRG's EVgo to install an additional 500 DC Fast Charge stations in 25 major US markets. The project is called the DC Fast Charge Expansion and is actually the second phase of a program started in 2014, which brought 100 DC fast charge stations to select California areas.

Even though the news of the DC Fast Charge Expansion program had just been released, I wanted to first talk about the East and West Coast Express Charging Corridors. If you remember, this program was announced back in January at NAIAS and the press release stated that approximately 100 stations would be installed in these corridors (Washington, DC to Boston, MA on the East Coast, and San Diego, CA, to Eugene OR, on the West Coast) and it would be completed by the end of 2015.

This was a joint venture between BMW, Volkswagen and ChargePoint. ChargePoint is responsible for the installations, and BMW and VW are basically telling them where they want them, and footing the vast majority of the bill. Time is running out and I knew they wouldn't hit the predicted deadline, so I asked the group what happened, and when can we expect it to be done. Here are some quotes from the discussion:

When asked about why they missed the predicted end of 2015 completion date, Fietzek said:

"The business model for ChargePoint changed for this program. Before this they were responding to site hosts that wanted to have a charger installed. Basically the site host would call them, and say they wanted a charger. Now, ChargePoint had to go out and say to property owners, 'I need to put a charger here, because BMW and Volkswagen want me to, do you want to work with us?' This was very different from what they were accustomed to."

"Another challenge of placement goes back to our goal of making sure they were no more than 50 miles apart. Seventy five miles just won't work."

I also learned that getting the sites in good locations was more important than just getting them in the ground and meeting a deadline. BMW knew these locations would likely be used for years to come, so it would be worth their while to take the time to make sure they got good locations. In that vein, Healey had this to say:

"There is a process in place between BMW and VW; collectively we have the final (site) approval. There were a lot of sites offered to us that we rejected. For instance, we looked at the customer and said, 'Do you want to have your wife go in and charge in this area late at night?' There were sites that we rejected because we didn't think it was a safe place. We want the best sites for our customers, basically."

I then asked if they thought BMW should finish this program before they start new infrastructure projects, like the NRG EVgo program which had just been announced and Fietzek quickly said:

"Different partners, different projects. I'd rather have them running in parallel than waiting for one to finish before starting another. We'll get things done much faster this way."

Cliff Fietzek, Manager of Connected eMobility for BMW of North America, stands in front of the special edition Shadow Sport i3 on display at the LA Auto Show

Finally, I asked that since it's clear the program won't be finished on time, when can we expect the two Express Charging Corridors to be completed, and Healey answered:

"Yeah, we're a little delayed. We're now shooting for early spring for completion. We always knew it was going to be tight. We sat with ChargePoint, we talked to the Volkswagen people and said, 'Can we do this in one year?' We knew approximately where we wanted to install the stations, but we still needed to contact the property owners, sign site host agreements, go through permitting and that just took more time than we expected. If you look at the ramp up, we started off slow, but are now really ramping up. We should have about 52 stations active by then end of the year, with another 19 already under construction. We're looking at finishing in late March or April."

Having personally gone through the process of installing a DC fast charger on my property in Montclair, NJ, I know the challenges that can arise during the process. I'll actually be pretty impressed if they do finish by Spring. That would mean that they installed the 100 stations on two coasts in about 15 months, and the company doing all of the site host agreements, permitting and installations never really took on a project like this before. That's really not bad in my opinion.

The DC Fast Charge Station I installed in Montclair, NJ. It's part of the East Coast Express Charging Corridor program

With that progress update on the East and West Coast Express Charging Corridors finished, I turned the discussion to the announcement made just hours before, the National ChargeNow DC Fast Program. This is actually an expansion of a program started in 2014, when BMW and NRG teamed up to install 100 DC Fast chargers to select California markets. That program was completed earlier this year, and this is the second phase. There will be an additional 500 DC Fast chargers installed in 25 markets around the country.

When I asked about why they chose these specific markets, Healey said, "One of the important points of the expansion of the NRG program is that these 25 markets cover 80% of our current i3 sales. Now, we don't want to forget about the other 20% of our customers; we're working on it, and you'll be hearing from us shortly about how we're filling in the other 20%. It's really a systematic approach."

The 25 markets covered in this second phase of the program are:

Arun Banskota, President and CEO of NRG's EVgo had this to say about the program:

“It is our mission to install the right charging solutions at the right places, and EV drivers have overwhelmingly told us they prefer DC Fast chargers at public spaces. Over the next 24 months EVgo will add reliable DC Fast Combo capability to what is already America’s largest DC Fast charging network. This will be the fastest and most cost effective build out of a new network ever – thanks in large part to our existing infrastructure and committed retail host partners... The only way such a massive expansion is possible is because of the purpose built, and forward looking planning behind the EVgo network...EVgo has installed infrastructure with the ability to efficiently and economically add this new DC Fast Combo standard as the number of electric vehicles have increased. EVgo owns and operates our chargers with long term agreements with premium retail hosts, and is able to provide the level of customer service, reliability, and pricing that will lead to increased EV adoption and high satisfaction among the existing base of EV drivers.”

The deployment rate of these 500 stations is expected to be aggressive. NRG is a very large company with vast resources and plenty of experience with regards to installing infrastructure. After all, they are an electric utility company. Healey told me that they have existing sites that currently have CHAdeMO stations that they'll be adding a CCS station to, as well as many other sites already identified and ready to go. He expects to see hundreds of stations completed within the first year and the entire 500 stations in the ground and operational by mid 2018. He even said that he's being conservative with these predictions based on the lessons learned by the previous programs they worked on, and that it is quite possible that they finish earlier than the mid 2018 prediction.

Since I had over an hour with the team, we covered a lot of infrastructure topics and there's just too much for one post. Check back next week for part two when the discussion turns to BMW's decision to offer free charging, but only for new i3 buyers, the future of DC charging and BMW's long term commitment to EV infrastructure.