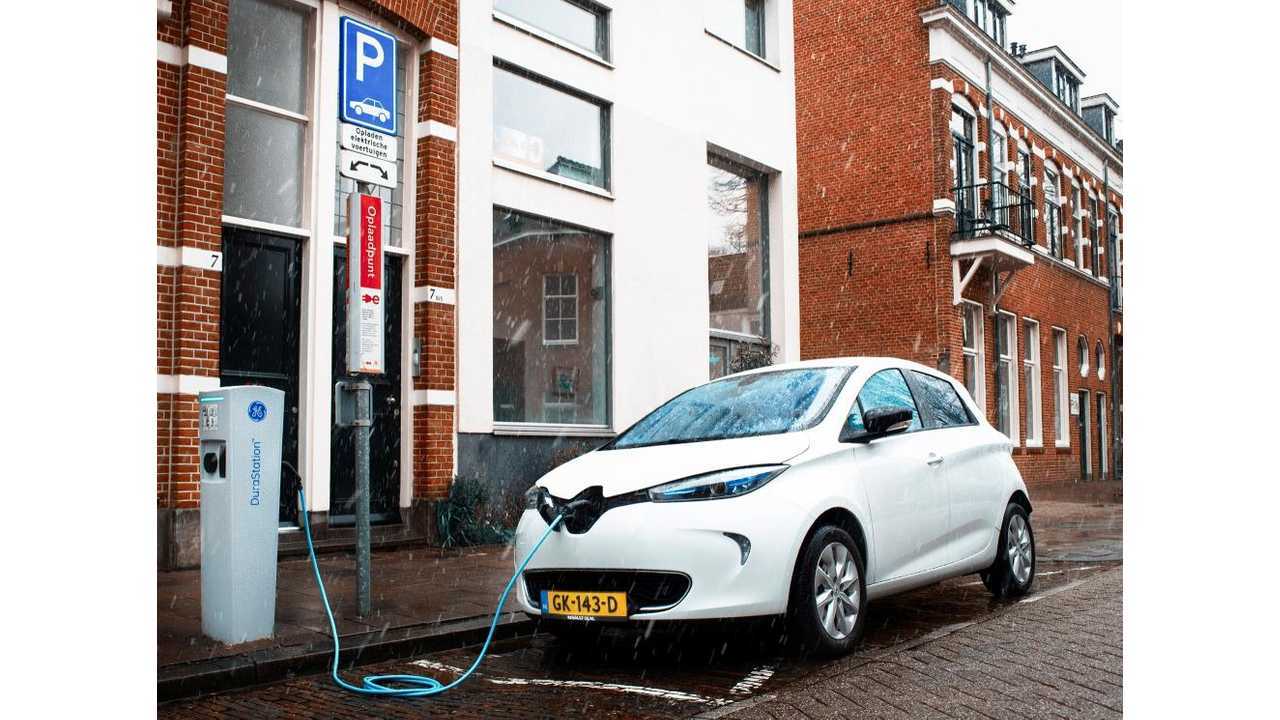 Renault signed a letter of intent with the Dutch Utrecht City Council, for a significant project combining electric cars and solar-powered charging points.  A true look into the future (we hope) for transportation.

A fleet of 150 Renault ZOE will be delivered to the city through the end 2017.

The very interesting aspect to this project though, is the scale of the charging infrastrucutre component, because 1,000 smart solar-charge stations are also to be installed - powered from 10,000 photovoltaic panels in the Utrecht region.

The second part of the project will concern vehicle-to-grid ecosystem to better use renewable energy soruces.

The signature ceremony was attended by Renault’s Laurens van den Acker, SVP Corporate Design and Guillaume Berthier, EV sales Director; in presence of the king and queen of the Netherlands, the Dutch minister of trade, Lilianne Ploumen and the French Foreign Affairs Ministry’s secretary of state for European affairs, Harlem Désir.

According to the letter of intent, the city of Utrecht could be the testing ground for the solar smart-charge project. Renault, Europe’s leader in electric vehicles, would supply a fleet of 150 Renault ZOE models through 2017 to the city. ElaadNL would handle management of infrastructures and the smart-charge standard, and LomboXnet would take charge of installing the network of unique public charging terminals powered by a 44 kW grid connection. Grid operator Stedin would be involved to balance supply and demand of the grid.

Phase one of the project would involve setting up 1,000 smart solar-charge stations, powered by 10,000 photovoltaic panels in the Utrecht region. Infrastructure installation would run side by side with development of a car-share service of electric cars, powered by renewable energy, for Utrecht residents. The Renault ZOE R.Access connectivity and 22 kW charging make it ideal for car-share and smart charging applications.

Phase two of the project would proceed with the partners developing a vehicle-to-grid ecosystem, with the network of solar chargers capable of both charging the electric cars and of feeding energy stored in the batteries of parked cars onto the grid to meet demand peaks. This could be the starting point for a new system storing renewably sourced energy.

Stepping up the energy transition

Through its pioneering work on EVs and their batteries, Renault contributes to the energy transition in the automotive industry by reducing the use of fossil fuels. Renault, through smart charging experiments, increases the proportion of renewable energy EVs use. One of the goals of the Smart Solar Charging Project developed by Renault, ElaadNL, LomboXnet and the Utrecht City Council is to make a substantial contribution to reducing the carbon footprint not only of the auto industry but of all sectors consuming electricity.

ElaadNL researches and tests the possibilities for smart charging on behalf of the dutch grid operators. With innovative techniques ElaadNL can charge electric cars in a smart way, exactly at the right moment. With Smart Charging, the abundance of electricity from the sun and wind is used to charge our cars. Live off the wind and drive on the sun!

In June 2015, LomboXnet introduced in Utrecht a world-wide scoop: a charging station making Smart Solar Charging accessible worldwide. This charging station can charge and discharge (vehicle-to-grid, V2G), establishing the foundation for a new local energy system based on local energy sources and local storage. The unique charging station is developed in a consortium of GE, Stedin, Vidyn, Last Mile Solutions, Utrecht Municipality and led by LomboXnet.

By implementing the vehicle-to-grid project on a regional scale, the region of Utrecht creates – together with partners like Renault - a large living lab for innovative smart grid solutions. This show case implements not only green power, but ensures also clean air zero emissions in the city and region of Utrecht. Thus, Utrecht makes way with Healthy Urban living. Not only to continuously improve its leading position as the most competitive region of the EU (according to Eurostat) but also to inspire other metropolitan regions as well."