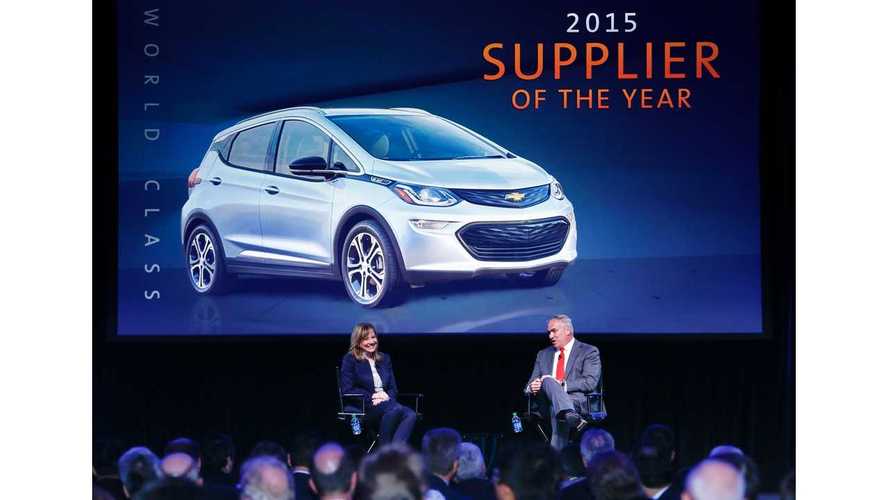 General Motors recognized 110 of its best global suppliers with a 2015 GM Supplier of the Year award during a ceremony held at Cobo Center.

LG Chem - lithium-ion battery supplier for Chevrolet Spark EV, Chevrolet Volt, Cadillac ELR and for the upcoming Chevrolet Bolt EV (more on that later) - was recognized by General Motors as one of the 110 best global suppliers from 17 countries.

Automotive suppliers from 17 countries received GM’s coveted Supplier of the Year award for going above and beyond GM’s requirements, designed to provide customers with the most innovative technologies that benefit customers and the industry’s highest quality vehicles.

GM’s 2015 recognition represents a nearly 40 percent increase in the number of suppliers recognized compared to 79 recipients in 2014. More than half of the suppliers are repeat winners from 2014.

“Our priorities are focused on building positive supplier relationships, bringing new, customer-centric innovations to GM, and being the OEM of choice among suppliers. The companies we recognize tonight not only have brought innovation, they delivered it with the quality our customers deserve.”

LG is the supplier for a lot of other devices for the Bolt EV past just the battery, so the relations must be pretty good:

There was also new Innovation award, and one of five suppliers - Delta Electronics, was awarded for the 2016 Chevrolet Volt on-board charger.

The Supplier of the Year, Overdrive and Innovation award winners are chosen by a global team of GM purchasing, engineering, quality, manufacturing, and logistics executives.  Winners were selected based on performance criteria in Product Purchasing, Indirect Purchasing, Customer Care and Aftersales, and Logistics.

General Motors’ 2015 Supplier of the Year award winners include: