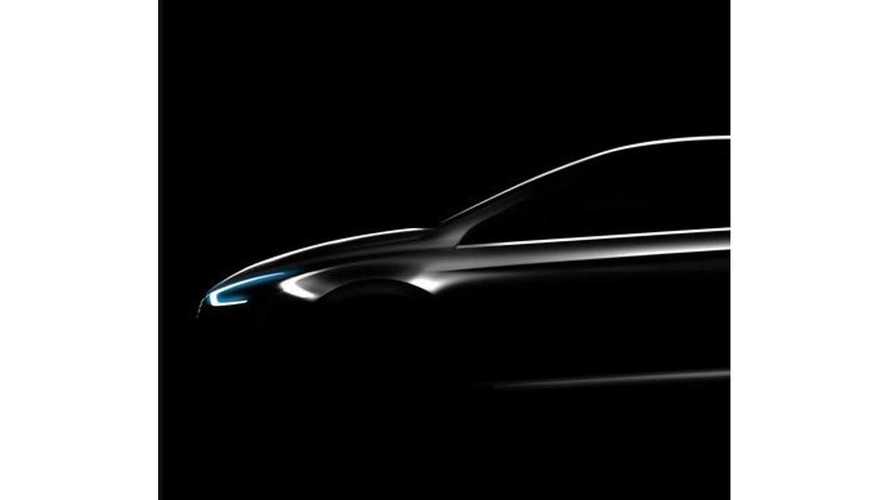 In 2016, Hyundai will become the first automaker to offer a car with the choice of three different electrified powertrains:

The car, called IONIQ, will make it world premier debut in January 2016 in Korea, followed by debuts at auto shows in March both in Europe (Geneva) and in the U.S. (New York).

Hyundai makes no mention of pricing or on-sale date in the press release on IONIQ, but the automaker does says that IONIQ is built on its own dedicated platform and states:

"In its fully-electric (EV) form, the IONIQ is powered by a high capacity, ultra-efficient lithium ion battery. The plug-in hybrid (PHEV) version combines a fuel-efficient energy with battery power obtained by charging the car with electricity, boosting its range while cutting its emissions. Finally, the hybrid (HEV) utilizes the gasoline engine and motion of the car to charge the on-board battery, which returns enhanced efficiency by supplementing the engine’s power."

We suspect that IONIQ will go on sale before the end of 2017, though this has not been confirmed by the automaker.

What we do know is the IONIQ is fulfilment of a promise made back in March of 2014 to introduce a mid-size electric car, stated then (and reiterated often) to be released in 2016. It was further reported later that the company had signed a deal with LG Chem for use of its next generation cells in the EV.  We would not want to take a stab at estimating the range of the BEV or PHEV at this moment, but would suggest 150 miles+ would be a good starting point for the all-electric Hyundai.

The lone teaser image shown above is the only image released of IONIQ thus far by Hyundai.

December 7, 2015 – Hyundai Motor has announced the name of its advanced, alternative-fuel compact vehicle due for launch in 2016: the Hyundai IONIQ . The car will be available with electric, plug-in gasoline/electric hybrid, or gasoline/electric hybrid powertrain – the first car from any manufacturer to offer customers these three powertrain options in a single body type.

As part of Hyundai Motor’s ambition to chart the direction of future mobility, while enhancing the lives of its customers, the IONIQ responds to rapidly changing customer lifestyles by breaking the mold for hybrid vehicles. As the world’s first model to offer customers the choice of three powertrain options, the IONIQ combines class-leading fuel efficiency with a fun, responsive drive and attractive design, a unique mix not yet achieved by a hybrid vehicle.

Woong-Chul Yang, Head of Hyundai Motor R&D Center said, “Hyundai Motor has a heritage of building innovative, fuel-efficient vehicles, so we are proud to advance our eco-friendly car line-up with the introduction of IONIQ. Our vision for future mobility focuses on choice, with a variety of powertrain options to suit customers’ varied lifestyles, without compromising on design or driving enjoyment. IONIQ embodies Hyundai Motor’s vision to shift the automotive paradigm and future mobility; IONIQ is the fruit of our efforts to become the leader in the global green car market.”

The new car’s name references elements of its creation. An ion is an electrically-charged atom, linking to the car’s clever combination of electrified powertrains. The second part of the name references the unique offering it brings to the Hyundai range, demonstrating the brand’s environmental commitment and willingness to maximize choice for its customers. Finally, the Q is depicted in the car’s logo as a visual breakthrough, acknowledging the fresh new approach of this advanced, low-emission model.

Based on an exclusive new platform, made specifically for the car’s multi-powertrain options, the IONIQ chassis is optimized to deliver responsive handling while remaining efficient in each of its three powertrain configurations. In its fully-electric (EV) form, the IONIQ is powered by a high capacity, ultra-efficient lithium ion battery. The plug-in hybrid (PHEV) version combines a fuel-efficient energy with battery power obtained by charging the car with electricity, boosting its range while cutting its emissions. Finally, the hybrid (HEV) utilizes the gasoline engine and motion of the car to charge the on-board battery, which returns enhanced efficiency by supplementing the engine’s power.

Hyundai Motor is one of the world’s leading manufacturers of hybrid vehicles and is committed to a future vehicle line-up comprising low- to zero-emission vehicles. This latest leap forward builds on Hyundai Motor’s heritage of world-first environmental developments. In 2013, Hyundai Motor became the first car manufacturer to mass-produce a hydrogen-fueled vehicle, the Tucson Fuel Cell (ix35 Fuel Cell in some markets).

Following its world premiere in Korea in January, the IONIQ is due to be shown at the Geneva International Motor Show, followed by the New York Auto Show, both in March 2016.