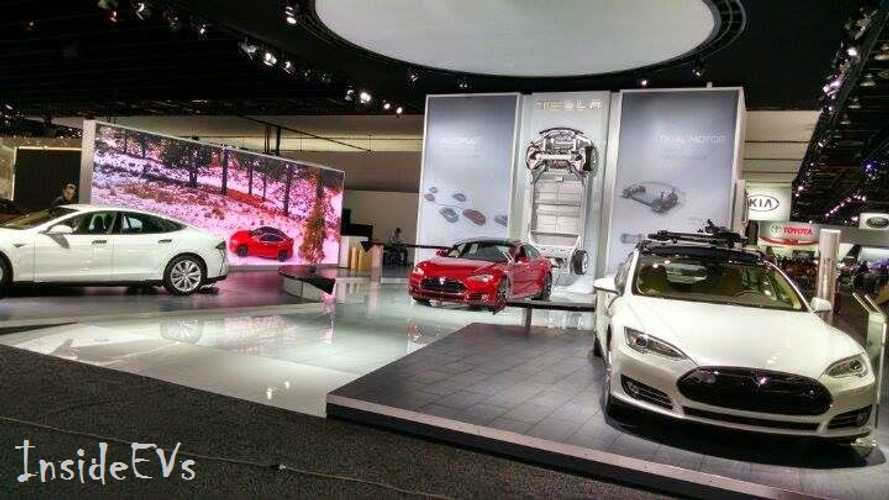 Over the course of a year we attend a lot of auto shows, and most of the top sellers of EVs are represented at near all of them, with the exception of Tesla - sometimes they are there, sometimes not.   It is hit and miss.

Last year, Tesla was at the "big" US show held each year in Detroit, the NAIAS (North American International Auto Show) to show off the new P85D/85D, and was scheduled to appear again this year - we had assumed to now introduce the Model X to the US north.

However, NAIAS spokesperson Max Mauncey has told Automotive News, that Tesla has just decided to back out of the show for this year.

Officially, the reason given was that the timing of new product launches didn't snyc up with the show dates, which kick off in the second week of January.

“It’s just one of those unfortunate things that can happen when automakers’ product cycles don’t align” with the timing of the show,"  said Mauncey to Auto News

The 'timing of new products' infers the official debut of the Tesla Model 3 in March, still we find it a curious decision given that show goers (and potential customers) would have been anxious to see a production version of the Model X in the flesh, and possibly get a live demonstration of those Falcon doors.

Instead Of Elon Musk And The Tesla Model X, Detroit Gets Aston Martin And The 1,000 HP RapidE

And while normally the story would end there, it is interesting who jumped at the chance to take over one of the empty booths vacated by the trio of Tesla, Bentley and MINI  (as event planners say this year's NAIAS is "jam packed" and they would need a second COBO center to accommodate everyone) - Aston Martin.

New Aston Martin CEO (and former 2nd in command at Nissan) Andy Palmer has been quite vocal about his luxury brand's switch to luxury electric supercars this year - so we expect to see his 1,000 HP RapidE in attendance in lieu of seeing the Model S and X.  Aston Martin has promised to deliver the car before the end of 2017.

We should also note there is some history between Mr. Palmer and Tesla, as the CEO has taken time to swipe at Tesla; specifically the ludicrous nature of having a ludicrous button, and the Tesla Model S sedan's inability to perform well on the track - something he promises his EVs will be able to do.