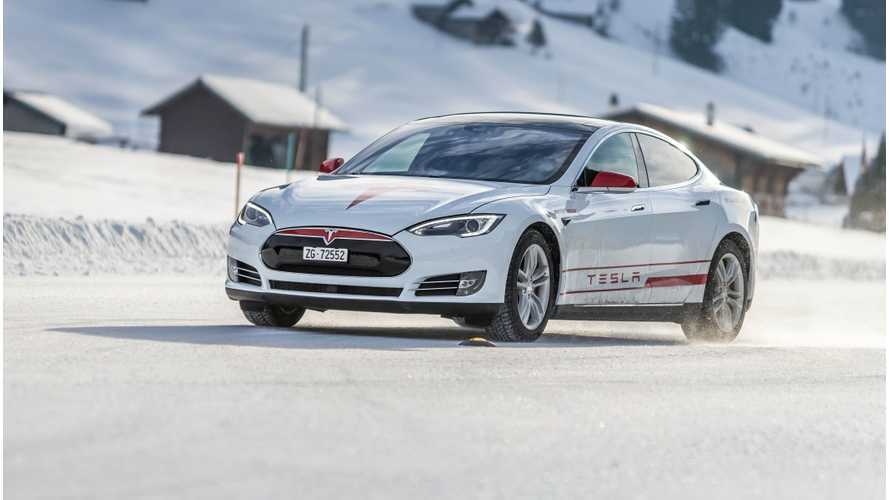 Winter Challenge on Snow and Ice from Tesla Motors on Vimeo.

One of the latest Tesla Customer Stories comes to us from Switzerland, where group of 32 Model S owners were enjoying driving on the snow and ice.

"Three, two, one – go! I step on the accelerator pedal and my Model S P85D lifts off! The frozen snow can’t withstand the tremendous torque of 930 Nm and engulfs the car in a cloud as if I was attending the desert rally of Paris-Dakar..."

Switzerland is one of the most important markets for Tesla and one where four wheel drive is highly appreciated.

The event included inter alia slalom, avoiding objects, cornering at speed and crawling down a steep and icy slope.

"At this point, I would like to express my gratitude and appreciation towards the engineers at Tesla! Even the dynamic traction control system ESP, working in the background to keep the car from swerving, is always at its best.

But the icing on the cake really turned out to be the digital four wheel drive; the independently acting front and rear motors react much faster than a conventional drive shaft setup, allowing for more speed, precision and safety. Even on the most slippery surfaces, it felt like the car was on rails."

"To summarize, there is no better four wheel drive car currently on the market, considering the traction and stability the Model S provides even on the most difficult surfaces."

Another interest note was that after a day on the track, and peak 500 Wh/km (800 Wh/mile) energy consumption, there was still enough energy for most cars to get back home without use of a Supercharger.