BMW i3 Batteries To Find New Home In Robots 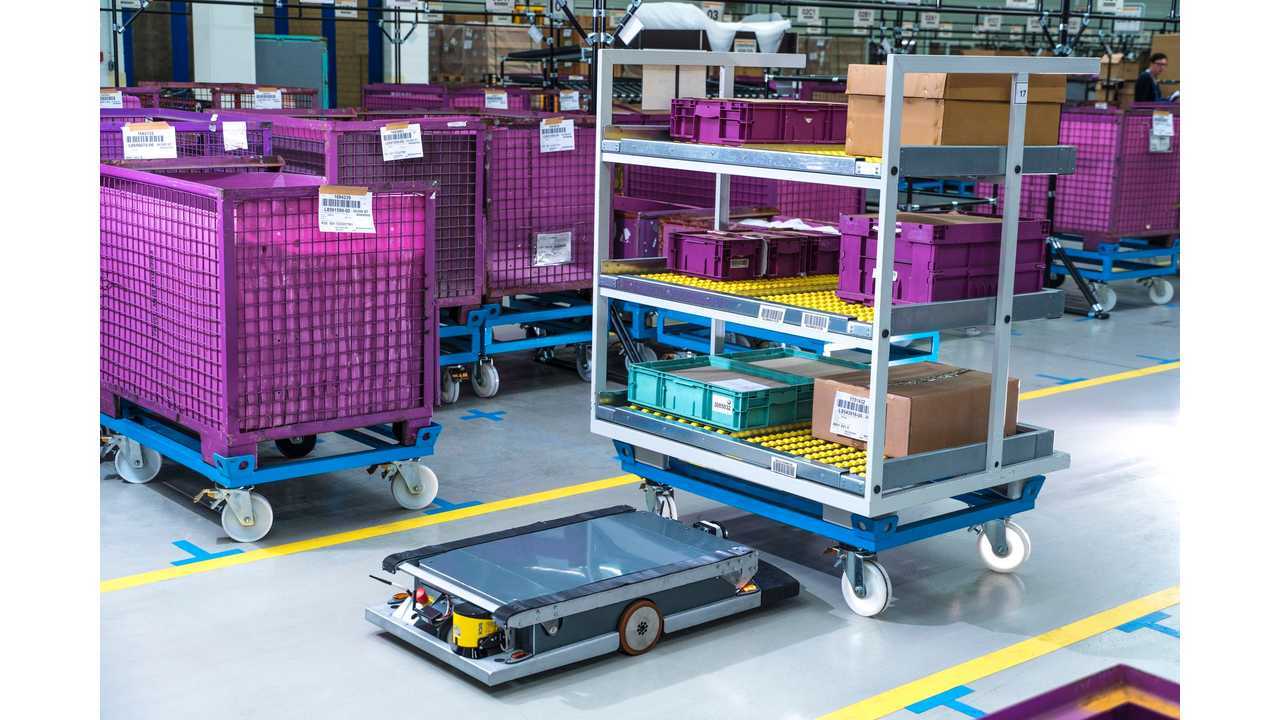 In Wackersdorf plant (Supply Logistics), BMW uses self-driving robots, which are equipped with battery modules from the i3.

According to the press release, these robots have enough energy to work eight hours shift.

We don't know how many recycled batteries BMW already has received, but it seems that after selling 50,000 plug-ins, some have become available - or perhaps in this case BMW is actually using new units?  Taking into consideration size of the robots, there won't be a need for too many used car batteries down the road.

Munich/Wackersdorf. Plant Wackersdorf supplies the BMW Group’s international assembly and production sites with car parts. In the hall of Supply Logistics, a self-driving robot maneuvers itself underneath a roller container with parts. Silently and with flashing lights, it picks up the container and begins to move through the logistics hall. The system is complicated and extensive; nobody can find their way around without a good sense of direction. But this is no problem for the transport robot, which is about the size of a suitcase. Flanked by radio transmitters and equipped with a digital map, it drives independently to the destination of the goods. When tugger train cross its path, a fitted sensor identifies the obstacle and stops the self-driving robot with car parts loaded weighing up to half a ton.

Digitization is essential for production

In terms of smart logistics, the BMW Group is promoting innovative and trend-setting logistics systems: “The development of the Smart Transport Robot is an important milestone for the BMW Group when it comes to digitization and autonomization in production logistics. This innovation project makes an important contribution to the agility of the supply chain in Logistics and Production. It enables the supply chain to adapt to changing external conditions quickly and flexibly,” comments Dr. Dirk Dreher, Vice President of Foreign Supply at the BMW Group.

Measuring its distance to three radio transmitters allows the robot to calculate its exact position and route. With the help of sensors, it identifies critical situations and can respond accordingly, sharing the route with people and other vehicles. At a later point when the innovation is being implemented in series operation, a 3D camera system will make navigation even more accurate. The transport robot will be able to function without the floor-mounted induction loops for navigation and will move freely within the space. The battery-powered radio transmitters mounted to the walls of the hall can be expanded to further areas in logistics flexibly without major effort and at low costs.

Utilization of recycled BMW i3 batteries

For the BMW Group, a self-driving robot tailored to meet the demands of the company’s supply logistics and production supply is a top priority. Besides custom-fit measurements for the containers to be transported, the vehicle also has sufficient battery capacity as the developers have drawn on the experience gained with BMW i: batteries previously fitted in BMW i3 vehicles are being sustainably reused. This BMW i3 battery module will provide eight hours’ worth of energy, covering a full shift.

Pilot project is being transferred to series operations this year

The BMW Group has partnered with the Fraunhofer Institute for this project. The collaboration under the label of the BMW Enterprise Lab for Flexible Logistics was established in September 2015. It aims to explore future solutions for logistics areas. Initial findings will be presented at the trade fair LogiMAT 2016 in Stuttgart from March 8 to 10, 2016, at the stand of the Fraunhofer IML as well as in the forum “New transport robots – agile, strong, versatile”. In the future, the Smart Transport Robot can be deployed in both packing areas and in assembly logistics. This step in the automation simplifies the materials procurement process for workers in packing departments and reduces the supply space in the supermarket. The self-driving robot is being developed and tested at the BMW Group’s Innovation Park in Wackersdorf. This center is the logistics hub for material management and just-in-sequence supply to BMW Group sites in ten different countries. Wackersdorf is also home to the cockpit production for several plants.