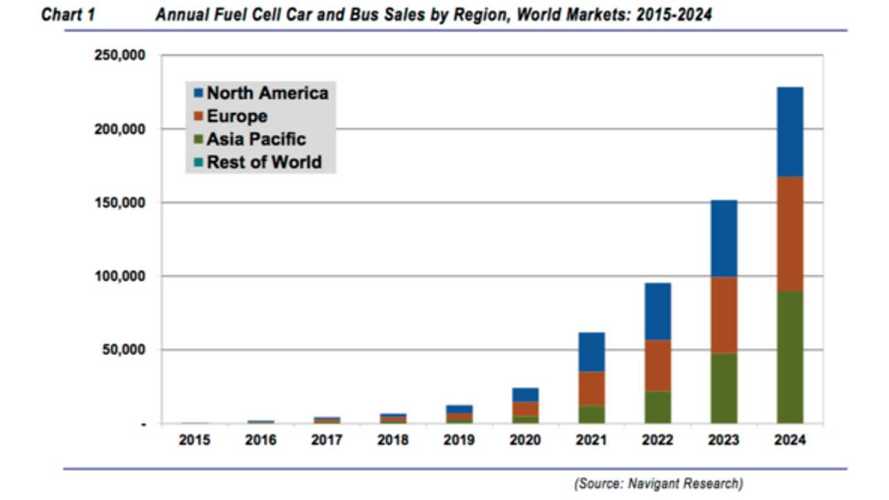 Navigant Research announced a forecast saying that by 2024, the hydrogen fuel cell vehicle market (cars and buses worldwide) will increase to 228,000 annually.

In other words, at best, sales will be much lower 10 years from now than plug-in cars, or even only all-electric cars, are today.

Taking into consideration that the forecast could turn out to be too optimistic, and that plug-ins will be even further ahead in 2024.   With all the recent long-range EVs announced, we still don't understand the heavy bet on hydrogen by some companies.

As of today, there are probably just 1,000 FCVs worldwide.

"Toyota’s introduction of the Mirai, its first production-level fuel cell car, has thrust fuel cell vehicles (FCVs) back into the spotlight. While the performance of FCVs makes them ready for commercial launch, the industry is still focused on the two key requirements for larger-scale market introduction: driving down vehicle costs to be competitive with battery and hybrid vehicle technology and developing the hydrogen infrastructure necessary to fuel the vehicles."

"Until the infrastructure is available, the market for FCVs is expected to remain supply-constrained, with vehicle production at low levels, according to the report. To facilitate the creation of FCV infrastructure, automakers are collaborating with new partners in retail fueling and hydrogen supply."

“Commercial FCVs are finally available to drivers in select markets, with early indications of real customer interest and signs that manufacturers are getting serious about pricing FCVs to compete at the premium-vehicle level. Automakers serious about fuel cell technology are expected to tackle the fueling infrastructure problem head on, with much needed investments in station buildout.”