Intelligent Battery Cells Communicate With Each Other 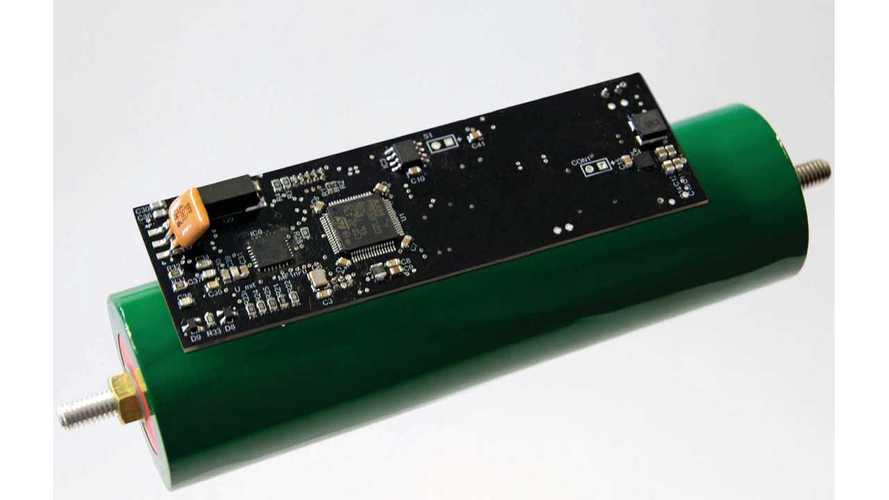 How about ultimate battery pack for electric cars?

The idea is to add a microcontroller to every single cell (inside the cell) to monitor the temperature, state of charge and others things.

The goal is to develop a smaller version that costs less than €1 per piece - so we are guessing these are best suited for large standard, automotive-specific cells.

Capacities of hundreds of cells varies and differences appear over time.

By having individual microcontrollers, the manufacturer of the pack doesn't need to check all cells to make sure they're exactly the same. Those with lower capacity (initially or because capacity fade overtime) will turn off automatically if they're not able to keep up with the rest of the pack.

So the pack is resistant to failure from one or several cells being of low capacity. According to the Fraunhofer, one weak cell in the chain could prevent the full discharge of other cells, but with turn-off capability, the rest of the cells could still power the car and range wouldn't fade much just because some cells are weaker.

"The core of electric cars are their batteries. So far, these have been monolithic blocks in which the individual battery cells as well as the necessary technology have been housed. All individual cells should theoretically be able to save the same amount of energy. In practice, though, this is somewhat different: due to production reasons, their capacities vary. This is problematic, since the cells are connected in series. The entire battery is therefore only as strong as its weakest cell. If this cell is “empty”, the remaining energy in the other battery cells does not help – the car has to be recharged. For that reason, manufacturers presort and install cells of a similar capacity into a battery. Since some cells are sorted out as a result of this process, and this pushes the price of the batteries up. Another shortcoming is that when a cell is defective, the vehicle stops functioning. That means that the entire energy storage device has to be replaced.

Independent battery cells communicate with each other

Researchers at the Fraunhofer Institute for Manufacturing Engineering and Automation IPA in Stuttgart have now created an alternative. “Our modular battery system solves these problems,” says Dr. Kai Pfeiffer, Group Manager at the IPA. The trick: each battery cell has its own built-in microcontroller that records relevant physical parameters, such as the temperature and the state of charge of the cell. As a result, each cell knows what condition it is in. The cells “talk” to each other via the existing power wiring between battery cells. This is known as power-line communication. They can also communicate with other devices, such as the on-board computer, which uses the data from the cells to calculate how much remaining energy the entire battery still has, the so called state of charge.

If a cell is empty, but the others still have energy stored, the car does not have to stop, like it did before. Rather, the empty battery cell simply decouples from the cluster, acting like a current by-pass. The others continue to deliver energy. “Depending on the cell quality, we can therefore increase the range by at least four percent,” explains Pfeiffer.“ Over time, this effect is amplified: in the case of an old battery, and if the empty cells are replaced, it is conceivable that a range up to ten percent higher can be achieved”.

Since one cell with lower capacity hardly affects the overall range of a car, the manufacturers no longer need to pre-sort it. This should significantly reduce costs. In addition, the capacities of the cells adapt to each other over time. This is because the ones that can store less energy are switched off earlier. The cells therefore run longer and, as a result, faster: their capacity decreases. And if a battery cell malfunctions, it is not necessary to bring the vehicle to the workshop. Since the car has more than one hundred cells, it does not depend on any individual one. And if the driver decides in favor of a repair, it is sufficient to merely replace the single cell instead of the entire battery.

The researchers have already developed a prototype of the battery cell. The challenge is now to miniaturize the electronics and embed them into cells. “We want it to cost less than a euro,” Pfeiffer says. Part of the development process is being conducted in the EU project “3Ccar”."