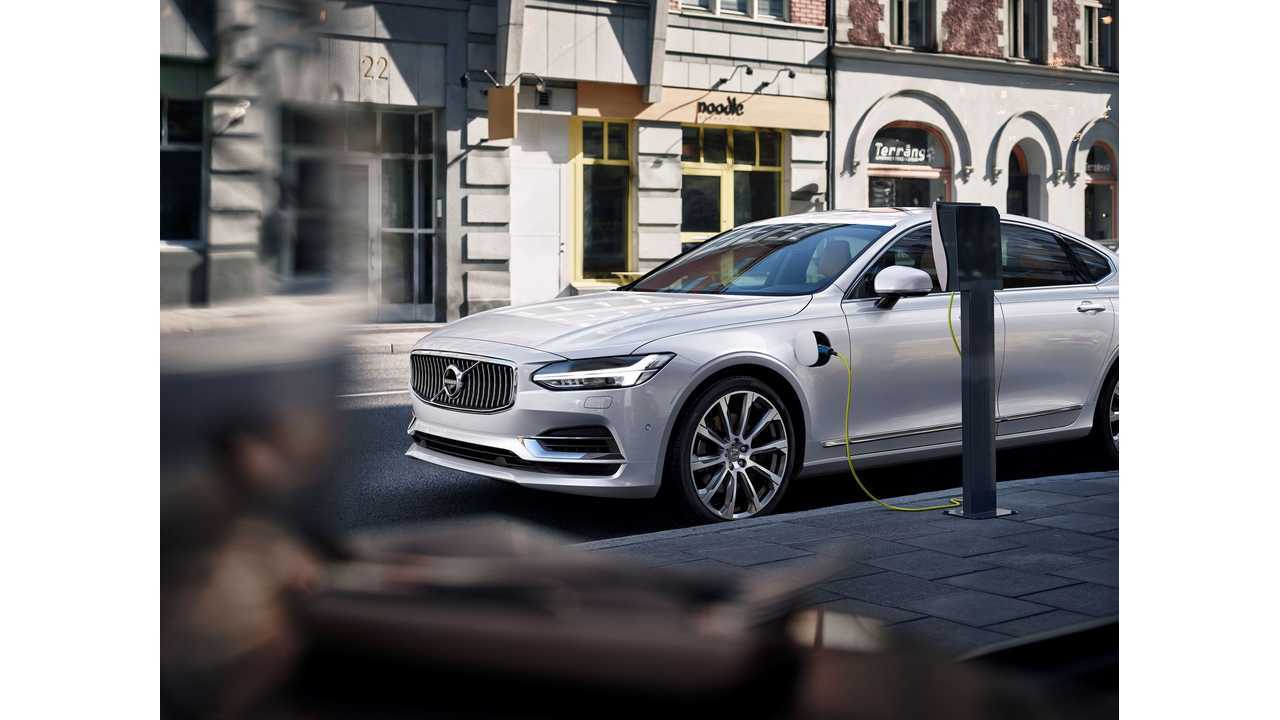 Volvo unveiled its new S90 luxury sedan, which as we know from the previous announcement of the strategy (and confirmed today), will also be offered in a plug-in hybrid version from launch.

“The S90 is a terrific addition to the Volvo Cars lineup in the United States, it will continue the terrific sales momentum Volvo Cars has gained within the last year.” - Lex Kerssemakers, President and CEO of Volvo Cars of North America

The model will launch in 2016 as a 2017 model with an expected debut at the NAIAS in Detroit in January.  The first cars are expected to arrive in June to dealer lots.

The S90 PHEV will be called S90 T8 Twin Engine (further specs below):

"The all-new Volvo S90 sedan is a bold entry into the luxury sedan market and sets a new standard with superior materials, technology, comfort and class-leading semi-autonomous features."

"The Volvo S90 will combine Scandinavian design with cutting-edge safety and cloud-based applications and services. The interior makes use of the Sensus Connect touchscreen that debuted in the XC90, providing a clutter-free interior with minimal dashboard buttons."

"The S90 will follow a legacy of strong sedan sales for Volvo Cars in the United States. Over the last several years, Volvo sedans have enjoyed significant demand at launch, with the last luxury sedan outselling robust competitors in its segment. Volvo Cars has seen an 18% growth in US car sales so far in 2015. The all-new 2016 XC90 has received strong demand from American drivers along with the XC60, which has enjoyed 31% growth in US sales."

“With $11 USD billion of investment over the past five years we have not only reimagined what Volvo Cars can be – we are now delivering on our promise of a resurgent and relevant Volvo Cars brand."

“Our idea was to bring something entirely new to this rather conservative segment and deliver a visual expression that exudes leadership and confidence on the exterior. On the inside we have taken the S90 to the next level, delivering a high-end luxury experience that promises comfort and control."

“The S90 has taken a big step forward in terms of driving dynamics, performance and ride. We have completely redesigned the Volvo driving experience from the ground up to deliver a sense of precision, engaging control and comfort."

On the technical side we see that S90 will be equipped with the same drivetrain and battery as the XC90.

That means AWD with 2.0-liter gasoline engine coupled with a crank-integrated starter generator and 8 speed automatic transmission for the front and a 65 kW electric motor for the rear.

In the middle of the tunnel is a 9.2 kWh lithium-ion battery with just 6.7 kWh usable capacity.

That should enable anywhere from 15 to 20 miles of all-electric range depending on driving patterns.

No rating was released at time of press by Volvo, however the sister XC90 T8 PHEV is rated at 17 miles of real world range on the EPA scale, so perhaps the S90 PHEV will net a mile or two higher at ~19 miles.

The Swedish company released a few images of a white S90 T8 Twin Engine (Inscription trim). We added in some general interior shots and a few more of the ICE T6 version to compare other colors: