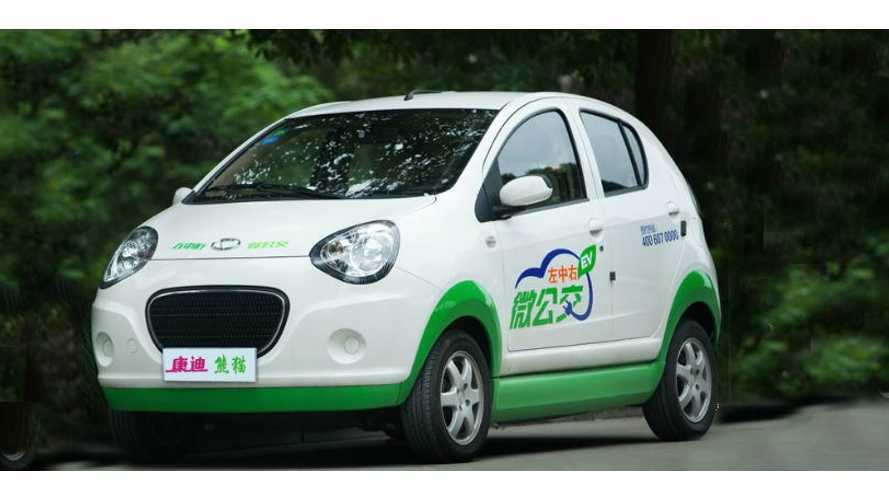 Kandi Technologies Group, or simply Kandi, is one of those Chinese companies that sells/leases/rents EVs in the thousands of units per month.

Their Kandi Panda EV model, launched earlier this year in China, is now in the Top 3 of all New Energy Vehicles with nearly 16,000 sold though the end of November.

Kandi Panda EV or K11 (the fruit of partnership with Geely) is equipped with LiFePO4 batteries and can go up to 80 km (specs at ChinaAutoWeb).

Interesting is that in the last couple of weeks, Kandi has bombarded the net with new project announcements.

On November 23, the automaker announced sales of up to 3,000 Kandi Global Hawk K17 to Micro Public Transportation Program in Nanjing. Initial 500 to be delivered this year.

On November 24, Kandi announced an initial order of 1,000 Kandi-brand model K10 for an EV-sharing program in Tianjin (deliveries to be completed this year).

Another 2,000 Kandi EVs (probably different models) - also this year - will be delivered to Haikou for the new Micro Public Transportation ("MPT") Program.

In mid-December, Kandi announced a production facility to be built in Haikou for 100,000 EVs annually (previous plan was for Wanning City).

"Kandi Technologies Group, Inc. (NASDAQ:KNDI) (the "Company" or "Kandi"), today announced that its wholly owned subsidiary, Zhejiang Kandi Vehicles Co., Ltd. ("Kandi Vehicles") signed a cooperation agreement (the "Agreement") with the Haikou municipal government ("Haikou Government") and the Haikou National Hi-Tech Industrial Development Zone ("Haikou Hi-Tech Zone") on December 11, 2015 to establish a production facility in Haikou ("Haikou Facility") with an annual capacity of 100,000 electric vehicle (EV) products (the "Project"). The Haikou Facility will include equipment transferred from Kandi Vehicles’ facility that was previously under construction in Wanning City due to strategic changes in Wanning’s urban planning. The Agreement marks Hainan’s strategic effort to accelerate adjustment in the industrial planning process.

Another positive is that Kandi Technologies' financial results sees net income through the end of September of $13.9 million with sales of $142.2 million. In Q3, EV sales exceeded 6,000 units and Q4 result will surely be even better: