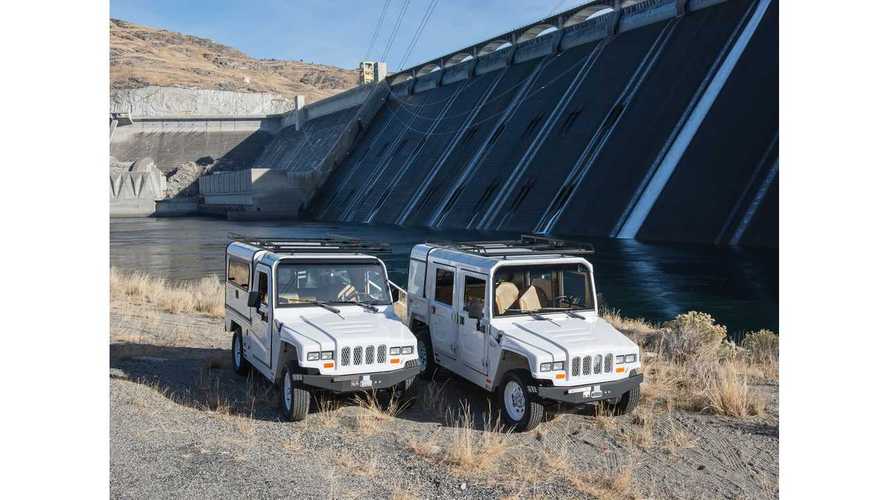 Deputy Power Manager Doug Anderson says he’s eager to get behind the wheel.

Who would've thought that the Jeep and Hummer descendants would be electric?

Both models are equipped with lithium-ion batteries and will be used at dam, which also provides all the power needed to charge the EVs.

We are not sure about range, but the lead-acid base version of EXV4 was rated at up to 55 miles, so we expect these 2 models to fare even better.

It's expected that fuel consumption by conventional vehicles used at the dam will decrease by 10-15% from a cost of around $100,000 annually.

"...27 electric utility trucks purchased by the Bureau of Reclamation for use at Grand Coulee Dam this fall. The EUVs, as they’re known, are driving a green car pilot project that delivers low-maintenance, zero emissions utility vehicles for use at the giant power complex in northeast Washington State.

"The trucks, built by e-ride Industries in of Princeton, Minnesota, were specially outfitted for use at Grand Coulee. “After they brought their needs to us, we outfitted a vehicle specifically for them with a high performance package, with the full enclosure, toolboxes, ladder rack and pull out bed tray,” says Kurt Bauerly, e-ride Industries General Manager.

Whether for short trips carrying people or equipment, EUV’s are designed to handle a 1000 pound payload and reach a top speed of 25 mph with plenty of torque to make it up steep grades around the power plant complex."

“It’s a large power complex and not very far from place to place, but there's an awful lot of small trips, short trips that employees make each day. That’s hard on vehicles and a poor use of a fossil fuel powered car,”.