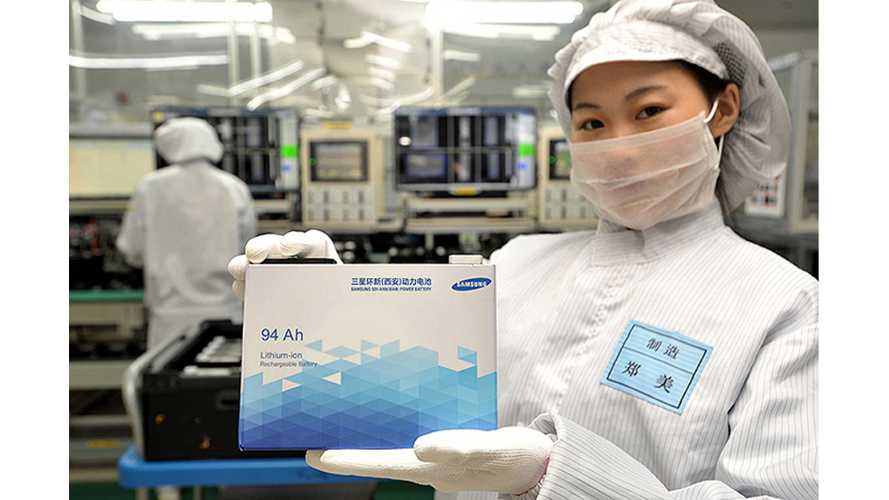 About a month ago BMW CEO Harold Krueger surprised the EV world by casually mentioning in an interview with Die Zeit that in 2016 the i3 would have increased range. That of course sparked a lot of online speculation as to how would BMW accomplish this. Did they figure out a way to squeeze in more of the same 60 Ah Samsung battery cells that the i3 currently uses? Might they have sourced higher energy density battery cells from another supplier? Could Samsung have made the new 94 Ah cells available to BMW now?

According to Samsung's Battery Technology Roadmap it didn't look like they would have those cells available for at least another year.

According to some well connected insiders, it is beginning to look like BMW will indeed use Samsung's now 94 Ah battery cells in the 2017 i3 which will begin production in July of 2016. Furthermore, one insider even believes BMW will offer a battery upgrade option for current i3 owners that want the new, higher energy dense battery cells.

Personally I just don't see how BMW can accomplish this without charging more money for the upgrade than most i3 owners would be willing to pay. Don't get me wrong, I'd love to get the battery upgrade myself. However, even if BMW discounted the new battery pack by giving owners a credit on the battery pack they returned, what would the upgrade price have to be for current i3 owners to bite?

Personally, I think I would go for it if BMW could do the upgrade for under $5,000. That would also be contingent on the rumors being correct, and the new battery pack would be the same physical size - 96 battery cells packaged in 8 modules, containing 12 cells each. Using the new 94 Ah cells, BMW would increase the i3's total battery pack size from 21.6 kWh to 33.4 kWh without increasing weight significantly, if at all. Assuming BMW continued allowing approximately 90% of the total pack as usable energy, that would mean that the new i3 will have approximately 30kWh accessible to use. 30kWh usable would increase the i3 BEV's range to approximately 125 miles per charge and the i3 REx to about 115 mpc.

With 115 EPA rated miles of range, my i3 REx would almost never fire up the range extender, which is fine by me. I'd still need it for the 240-mile trips to Vermont I take every couple months, but not for much more than that. If the i3 had 125 miles of range when it initially launched, I definitely wouldn't have ordered mine with the REx.

The battery tray removed from my i3 for service. This contains 8 modules, each holding twelve 60 Ah Samsung SDI battery cells. The new 94 Ah cells are the same size and can simply replace the current cells, in the same modules and fit nicely into the existing battery tray.

However, I'm still not convinced BMW will offer an option for current i3 owners to upgrade, and I'm even less convinced that they could offer it at a price point which would make it a reasonable purchase for someone who has only owned their car for a couple years or less. If they had 100,000 miles on the car, and the battery had already degraded to 75% or 80% or so of what it was when it was new, then the owner might be able to justify the cost of a new replacement pack. Of course, this is all speculation at this point.

Nonetheless, we'll be talking a lot about these questions until BMW finally releases the details. Which, by the way, I don't expect them to do for at least 4 or 5 months. Rumors of an upgrade to an EV's battery pack can really hurt sales of the current vehicle. The only thing that will hurts sales even more is when the manufacturer admits it, gives the specifications and the expected launch date for the new model. If anyone out there is i3 bargain hunting, and can live with the i3's current range, you can expect some killer deals this spring as BMW clears out the remaining 2016 inventory to make room for the 2017s with the new battery.

One i3 battery module. As you can see there are twelve cells in each module, and there are eight modules in the pack.

A battery upgrade would seemingly solve another issue that has bothered some i3 REx owners, that being the size of the gas tank - or really how much of it they have access to. All i3's come with a 2.4 gallon gas tank. However, for the US market, BMW had to restrict the amount of gas available to use to 1.9 gallons. The reason was to satisfy the California Air Resource Board's criteria for a BEVx vehicle.

One of the criteria for an extended range electric vehicle to be classified as a BEVx is that the range of the car while being driven on battery needs to exceed the range it can drive on gasoline. If BMW allowed the full 2.4 gallons to be available for use, the gas range would be slightly greater than the electric range, and the i3 REx wouldn't qualify as a BEVx. BMW would lose some of the highly valuable ZEV credits they get for every i3 REx sold in "CARB states".

If the i3's electric range is increased more than 20 additional miles, then the full 2.4 gallon tank could be accessed without a BEVx violation. Therefore, I fully expect the 2017 i3 REx to have use of the entire 2.4 gallon gas tank as it does with the European i3s. Actually, if the new batteries do extend the i3 REx's battery range to the possible 115 MPC, then BMW could increase the gas tank to a little over 3 gallons if they wanted to. The i3 REx would then offer over 200 miles of driving range without needing to plug in or fill up.

Whether or not BMW will indeed use the new 94 Ah cells from Samsung is yet to be known. According to CEO Krueger, we do know BMW will be upgrading the i3's battery pack, and the most obvious and easiest way to do so would be with higher density battery cells. Samsung's new 94 Ah cells are the same physical size as the 60 Ah cells used in the current i3, so upgrading to the new cells couldn't be any easier - as along as they are indeed ready and available.

As for the battery upgrade for existing i3 owners, it's a tempting proposition, and one that I hope BMW fully explores to see if there is a way that they can do it at a reasonable cost (I say that's under $5,000). However I'm just not convinced that they can offer an upgrade without losing a lot of money on every pack they sell. Time will tell, and I'm sure there will be a lot of discussions about his before we actually get all the facts from BMW.