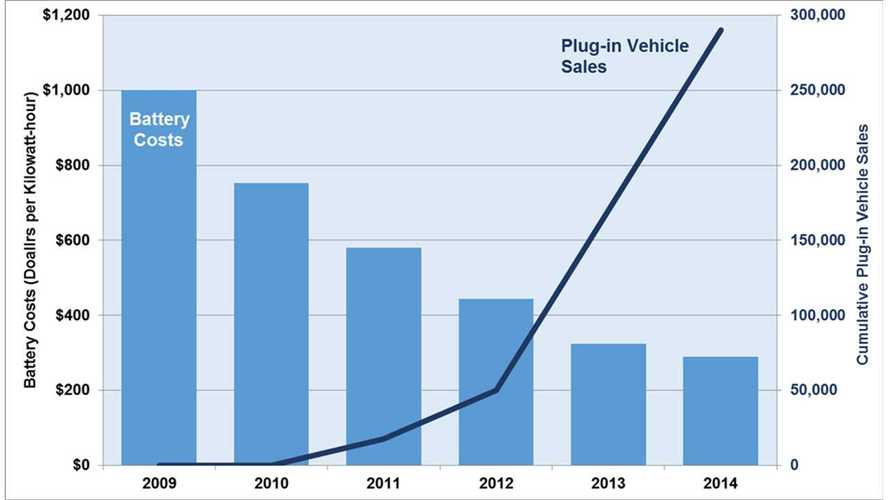 The U.S. Department of Energy is reporting that the continual drop in battery cost correlates directly to the increase in plug-in vehicle sales.  While we think fact this is somewhat true, we would put as much weight on the ever-increasing CARB requirements to actually sell EVs over the past several years, and also on the much expanded plug-in offerings (from 3 in 2011 to ~22 in 2014)

In 2009, the DoE estimates that lithium-ion batteries cost ~ $1,000 per kilowatt-hour (kW-hr). At this time, electric vehicles sales were essentially non-existent (very few models were on the market though). By 2011, companies were starting first efforts to produce and mass-market plug-in vehicles, as the cost dropped to $600 per kW-hr.

Tesla reports battery pack cost per kWh as low as $260 (some reports say $200 per kWh) at this point and is confident that cost will be much lower soon enough.

With battery companies aggressively increasing production, as well as companies making plans to build more Gigafactories, and automakers worldwide funneling money into adding additional battery manufacturing sites, we will see this number drop exponentially in the years to come.

Whatever the main drivers to growth ultimately are, we are just pleased to see plug-in sales continue their strong growth in the US and around the world.