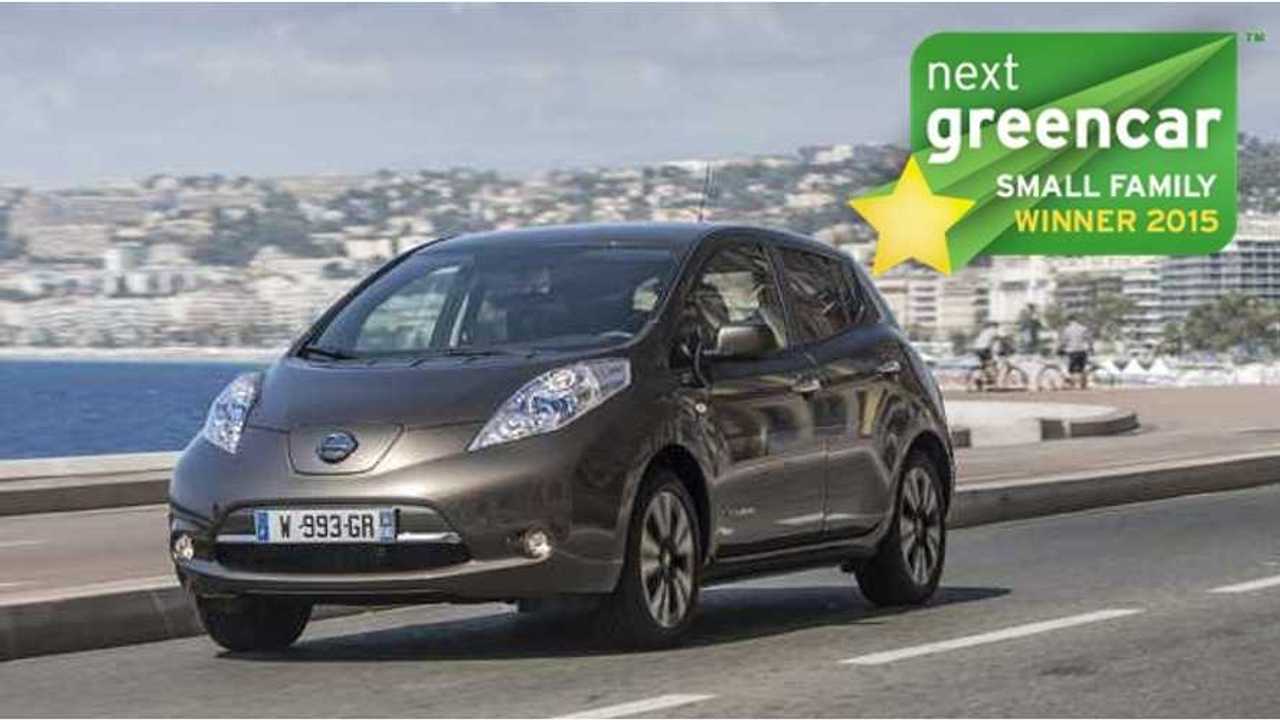 Just like in 2014, the 2015  Next Green Car Awards (which recognize the UK’s best green cars in 2015) include a decent number of plug-in electric cars.

40 new models were considered in 10 categories (9 + ‘Next Generation’ award).

"This year, 80% of the winning and commended models emit less than 100 g/km tailpipe CO2 (official). By powertrain, six have plug-in capability (four PHEVs and two pure EVs), reflecting the increase in available electric models and their growing popularity with customers. Taken together, the average CO2 figure of the cars receiving an award in 2015 is just 72 g/km."

At the announcement of the 2015 winners, Ben Lane, Managing Editor at Next Green Car commented:

"Despite the recent emissions scandal, the NGC Awards 2015 demonstrates that vehicle manufacturers are continuing to innovate and offer genuinely low emission models to UK car buyers. This is being enabled by the use of electric drivetrains as evidenced by the fact that 40% of this year’s winners are either a plug-in hybrid or a pure EV."

"The ten winners of the Next Green Car Awards 2015 are low emission models that are also great to drive. These awards seek to provide an independent assessment of the best new cars on the market, and, coupled with the NGC Rating and the suite of Next Green Car tools, help car buyers make good choices when looking for a more economical and lower emission car."

In the Small Family class we spot two plug-ins and note that the Nissan LEAF won:

"The new Nissan Leaf might not look very new at all, but it is what’s under the skin that counts. With the larger 30 kWh battery, the Leaf’s new range is officially 155 miles, meaning you can comfortably cover around 125 miles in real world conditions – the same distance as the 24 kWh model’s official range. A step forward in mass-market EVs, the ability to cover well over 100 miles on one charge opens up Leaf ownership to a new group of potential drivers who would never before have considered going electric. Add to the new battery an upgraded NissanConnect EV infotainment system plus improved equipment, the sales success of this ground-breaking model shows no sign of slowing down. Priced from £24,490 including the government's Plug-in Car Grant."

NGC verdict: "The best-selling electric Leaf gets better still with a longer range and more kit. Now with fewer charges needed, the Leaf is an award-winning car in its own right, not just a winning EV."

"The Golf GTE is an excellent car that is ideally suited to the needs of 21st century driving. The plug-in hybrid also demonstrates that there is more to VW than just diesels, clean or otherwise! The GTE can cover more than 25 miles (official) in electric only mode, and emits only 39 g/km of CO2 (weighted combined). In addition to its electric capability, the GTE has all the usual features of a family hatch in the familiar shape of the VW Golf. Add to that the versatility of the powertrain to either be an eco-warrier or – in GTE mode – a B-Road blaster, and the Golf GTE becomes a car for all occasions. Priced from £28,755 including the government's Plug-in Car Grant. "

"While Volkswagen’s plug-in hybrid might have lost out in the Small Family category, fitted into the Passat it wasn’t going to lose out a second time. The ability to run in pure-electric mode is perfect for around town, while the Passat also offers the range of a conventionally powered vehicle – an attractive proposition for many car buyers. The Passat GTE’s statistics feature official emissions of 39 g/km CO2 from the 215 bhp combined powertrain, with a weighted combined fuel economy of 166 MPG (driving on petrol and electric fuels). With the versatile drivetrain added to the already exceptional Passat, the GTE is a winning combination for VW. Price TBC. "

NGC verdict: "Volkswagen’s Passat is an excellent large family car that performs well in every area. Add to it the plug-in hybrid powertrain that effortlessly provides drive for all situations and the Passat GTE becomes a dominant model in the large family class"

Nissan e-NV200 Combi (passenger version) is listed among MPVs but no award this time.

"Already the best-selling plug-in hybrid in the UK, Mitsubishi has done an excellent job in significantly refining the Outlander PHEV. Focusing on the weaker design elements of the outgoing model, the new Outlander now excels in many departments. The quality of the interior is markedly improved, the exterior styling is up-to-date, equipment levels are better than ever and the powertrain offers an excellent balance between economy and performance. The practical Outlander PHEV emits just 42 g/km CO2 (official) and returns a quoted 157 MPG (weighted combined) – overall fuel economy depending heavily on the time spent in all-electric mode. With its new design and six level regen braking to choose from, driving electric has never been so comfortable, easy and rewarding. Priced from £29,304 including the government's Plug-in Car Grant. "

NGC verdict: "The new and significantly improved Outlander PHEV builds on the considerable success of the outgoing model. While still cheap to run, now with a refined cabin and driving experience, the new model secures Mitsubishi as a key player in the PHEV market."

"The XC90 is one of the best cars launched this year and, with a plug-in hybrid powertrain that trounces the rivals in its sector, gets better still. Using a 2.0 litre petrol engine combined with a powerful electric motor, the Volvo returns an official fuel economy figure of 135 MPG with emissions of just 49 g/km CO2 (weighted combined) – all from a large SUV. Add in the fact that you can have seven seats with Volvo’s excellent interior and it is easy to understand why the XC90 is highly commended – pipped to the title primarily on price rather than performance. Priced from £60,455 including the government's Plug-in Car Grant. "

"With the C350e, Mercedes has produced a high-quality plug-in hybrid model in the highly competitive compact executive market. The combination of 2.0 litre petrol engine and electric motor make for strong performance figures, both in terms of speed and economy. With a quoted 123 MPG (combined) and CO2 emissions of just 48 g/km (weighed combined), the C350e offers significant savings for those who can drive on electric over short-medium distances. While it might not match the economy of a diesel over longer journeys, the 350e will be an attractive choice for many who want a comfortable C-Class with electric capability. Priced from £38,270 including the government's Plug-in Car Grant. "

There is no Tesla Model S on the list this year, but Model X was classified among Next Gen models:

"Having been highly-anticipated for some time, Tesla’s Model X is finally due to arrive in Europe in 2016. With the same innovative powertrain that underpins the superb Model S, the Model X will offer more space and practicality, while still providing the luxurious (and powerful) emission-free driving experience that followers of Tesla have come to demand. A range of 250 miles is expected, along with in-car, car-to-car and car-road connectivity that keeps on getting cleverer thanks to Tesla’s continual update programme. Add to this the roof-hinged rear Falcon doors that will add a bit of glamour (and practicality) to every trip."

NGC verdict: “As Tesla’s most advanced electric car yet, the Model X is smart in form and function. With its added space and falcon-wing doors, it has the potential to be even more popular than the Model S. Tesla continues to move from strength to strength.”

"As a plug-in hybrid version of one of the best selling cars in the world, the launch of the 330e marks a key stage in PHEV development. Emissions and fuel economy are currently being quoted at 44 g/km CO2 and 134.5 MPG (weighted combined) respectively, to be delivered within the familiar (and well respected) 3-Series set-up. Combining a 2.0 litre petrol engine with an electric motor and BMW’s famous driving dynamics will make for an engaging driving experience combined with low running costs. With these specs, we expect the 330e to be a top choice for fleet managers in 2016. "

Honda Clarity FCV was also listed, but without award.

** NGC Rating to be confirmed "