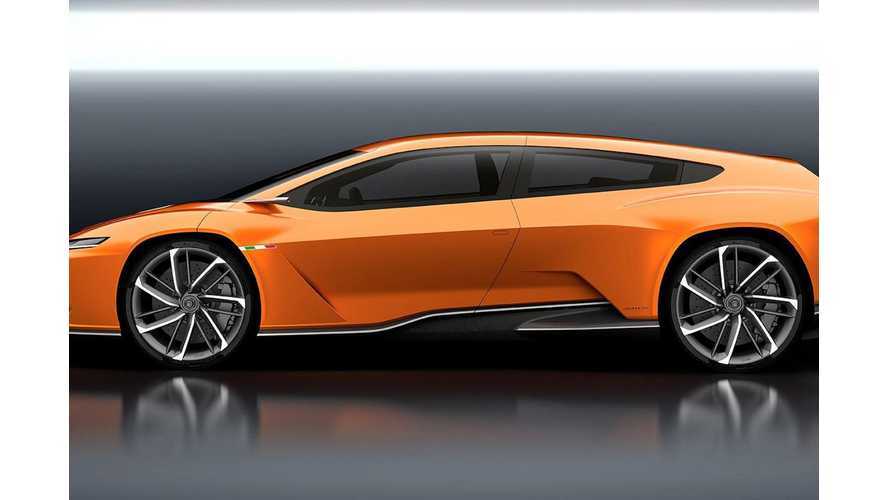 The Italdesign GTZero concept, an all-electric, 311-mile range supercar, was unveiled in Geneva. At this time, this is purely a concept, but we do like the idea of long-range, stylish electrics, so hopefully it gets the production green light at some point in the future.

The car is built on a modular carbon frame with aluminum subframes. Its monocoque "eggshell" frame allows it to accommodate different body shapes and powertrains due to the ability to change dimensions and configurations without altering the carbon structure.

GTZero is powered by three electric motors, two on the front axle and one on the rear. The company says a hybrid option is also a possibility.

The car boasts 483 hp and a top speed limited to 155 MPH. 80% recharge can be reached in just 30 minutes. It has 22in wheels up front and 23in wheels in back. Active aerodynamics are achieved with air intakes and  a spoiler.

The interior is very futuristic, with everything controlled by touchscreens. The only "physical" components in the car are the parking brake, and three large air vents. Touch pads on the steering wheel change the dashboard display and control lights, wipers and other functions.

Clear influnces from the Ferrari GG50 and Lamborghini Huracan are prominent. The VW-owned company also mentions:

"Elements of the design pay homage to past cars like the Alfa Romeo Scighera, Daewoo Bucrane and Bizzarini Manta."

Italdesign was founded by Giorgetto Giugiaro in 1968, but he sold it to Audi last July. Audi is part of the VW Group, which is where the tie to Volkswagen comes in.