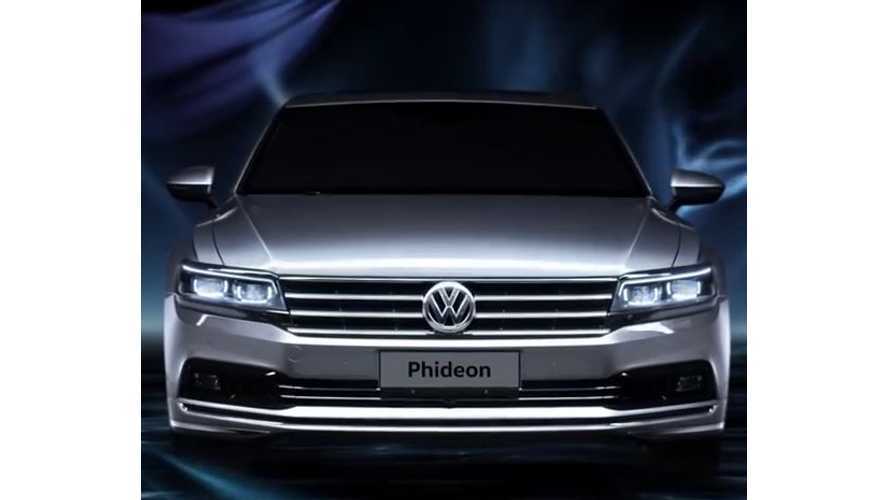 According to VW, the Phideon will initially be sold only in China starting in Q3 of 2016

Phideon was developed in Germany with help from VW's Chinese partner SAIC Volkswagen.

First release versions of the Phideon will likely be the Phideon 3.0 TSI 4MOTION, which features AWD and a 3.0 liter V6 turbocharged direct injection gasoline engine.

Later on, VW will launch other versions, including a plug-in hybrid model.

Of note is that Phideon is the first VW offering on the Modular Longitudinal Matrix (MLB 2) platform. This platform will underpin several upcoming electric and plug-in hybrids from the VW Group.

VW did not release pricing information at this time, nor did the automaker comment on availability outside of China.

"The all-new Volkswagen PHIDEON luxury saloon is making its global debut at the Geneva Motor Show."

"This innovative and luxurious four-door car is positioned above the Passat and the Magotan, which is available in China, and thus in the premium segment."

Today saw the world premiere of the Volkswagen Phideon, ahead of the Geneva International Motor Show 2016. The all-new premium saloon will be launched on the Chinese market in 2016 and combines distinguished elegance with maximum dynamic performance.

The exterior of the Phideon has smooth transitions and clear lines, from the energetically forward-leaning front and a sharp shoulder line to the characteristically harmonious coupé sloping roof at the rear. At over five metres in length, the C model is set off to its best advantage with a powerful radiator grille, striking chrome elements and the ambient exterior lighting, which makes its début with this car.

The interior also conveys a sense of luxury: The rear passenger compartment has a genuine lounge character, while Volkswagen has integrated ground-breaking technology in the cockpit, such as the newly developed Active Info Display for a virtual 3D look and the chauffeur mode, which allows the passenger to send information to the infotainment system.

With this sporty saloon car Volkswagen has set its sights on a future in which design and innovative technology are elegantly combined.