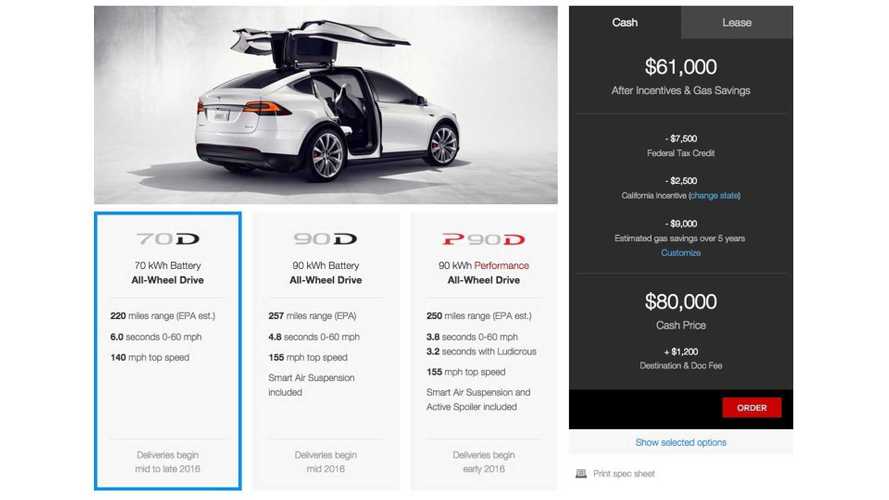 Tesla has opened up Model X orders to the general public, and as promised the Model X 70 D has arrived as well.

Tesla has also kept CEO Elon Musk's pledge to be within about $5,000 of similarly equipped Model S pricing, with the starting MSRP of the 70 kWh Model X beginning at $80,000.

Particularly of interest is the revelation that the base model comes in a 5 seat configuration, and Tesla says the company will start deliveries of the 70D in "mid to late 2016", while the 90D arrives "mid 2016", and the performance P90D deliveries happening in "early 2016" to non-Signature Series reservation holders - of whom should be received cars within a couple weeks.

As noted in the above graphic, upgrading to the six seat configuration (which also nets rear heating and cooling) will set the consumer back $3,000, while the premium 7 seat arrangement is worth $4,000.

Plenty of other features are also options on the Model X 70D:

Public viewing of the Tesla Model X configurator is still only available to those after putting down a $5,000 deposit reservation, and after getting an "invite to configure" email from Tesla, but the graphic (below) shows all the features and options available on the 70D.

We expect once current reservation holders have all had a decent chance to order their Model X vehicles and reserve their place in line, the process (and order screen) will be publically available.