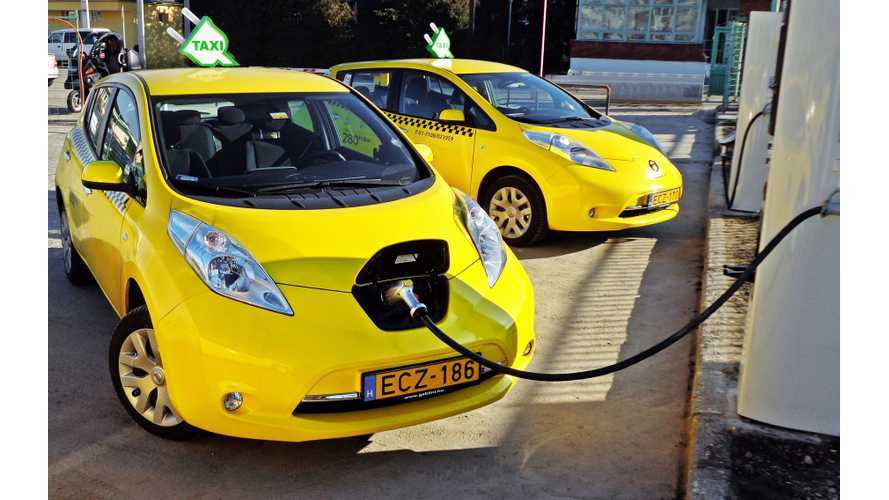 Nissan announced a milestone of having 500 all-electric taxis in operation in Europe.

The Japanese company estimates that in Europe more than 550 LEAFs and e-NV200 are used as taxis, which makes Nissan the top electric taxi maker on the continent.

So far this year, 100 new taxis entered service, including 65 in Hungary.

"Nissan is leading the electric revolution with more than 550 electric taxis now on the road in Europe. Taxi drivers are some of the most demanding users with the highest mileage, reinforcing the reliability and versatility of Nissan electric vehicles.

During 2015 alone, over 100 electric vehicles were delivered to taxi companies across Europe, making Nissan the best-selling manufacturer of 100% electric taxis. The growth of the electric taxi market looks set to continue, as its popularity has started to take hold in Eastern Europe. Green Lite Taxi Kft., based in Budapest, has purchased 65 Nissan LEAFs in a bid to become Hungary’s largest zero emission fleet. To power its pioneering franchise, CEO Örs Lévay has installed seven quick chargers within the city."

“We are delighted to be the first taxi company in Hungary to go 100 percent electric and the 199 km range means we only need to charge our taxis once during a shift. Along with the large savings on fuel and maintenance, the Nissan LEAF is very smooth to drive and almost silent, which means a more enjoyable journey for my customers and the drivers say typical 10 hour shifts are less tiresome.”

A large number of electric taxis are used in Estonia, and one of them covered 218,000 km (135,000 miles) on the original battery pack,according to the press release.

"In Estonia, it has been reported that a Nissan LEAF owned by taxi company, Elektritakso, has clocked up over 218,000 kilometres on its original battery pack, showcasing the high quality and reliability of Nissan’s electric vehicle range. In total, there are 80 electric taxis and counting in Estonia, whilst in Lithuania, Nissan is poised to deliver its first eight 100 per cent electric taxis to the Smart Taxi Company, based in the country’s capital, Vilnius, for late 2015.

What’s more, with the launch of the new 30 kWh Nissan LEAF, drivers can travel 26 percent further making it an even more practical choice for taxi companies.

Nissan electric vehicles - which include the Nissan LEAF and the e-NV200, a passenger and light commercial vehicle - are becoming increasingly popular among European taxi businesses, with the Netherlands and the UK topping Nissan’s e-taxi league table."

Other top markets are Netherlands and the UK:

"Taxi Electric in Amsterdam was the first private taxi service to switch to a fleet of 100 percent electric taxis in November 2011. Since then, others from across Europe have joined the revolution, with the Nissan LEAF and e-NV200 now being used by taxi businesses in Stockholm, Prague, Barcelona and Rome.

With running costs as low as €0.03 per kilometre, companies like C&C Taxis, based in rural South West England have saved more than €79,000 on average each year. One of a growing number of businesses across Europe using Nissan electric vehicles in its company fleet, C&C Taxis proves that Nissan electric vehicles operate reliably as taxis with huge cost savings and a significant reduction in their carbon footprint."

Interesting is that Nissan refers to sales growth in 2014 compared to previous years, instead of 2015, which makes us wonder whether something is wrong with 2015 sales to not be able to present growth for current year?

"The 100% electric Nissan LEAF saw a lift in overall sales of 33 percent in 2014, compared to the previous year. With fewer moving parts, Nissan’s electric vehicles offer estimated maintenance costs up to 40 percent lower than petrol or diesel alternatives. Furthermore, European owners can also benefit from various incentives such as no business tax or vehicle excise duty on zero emission vehicles."

“We are so proud to be announcing this all-important milestone. Nissan has already delivered 30 percent more e-taxis this year than in FY14 and this figure is constantly increasing, as more taxi companies realise the benefits of becoming 100 percent electric.”