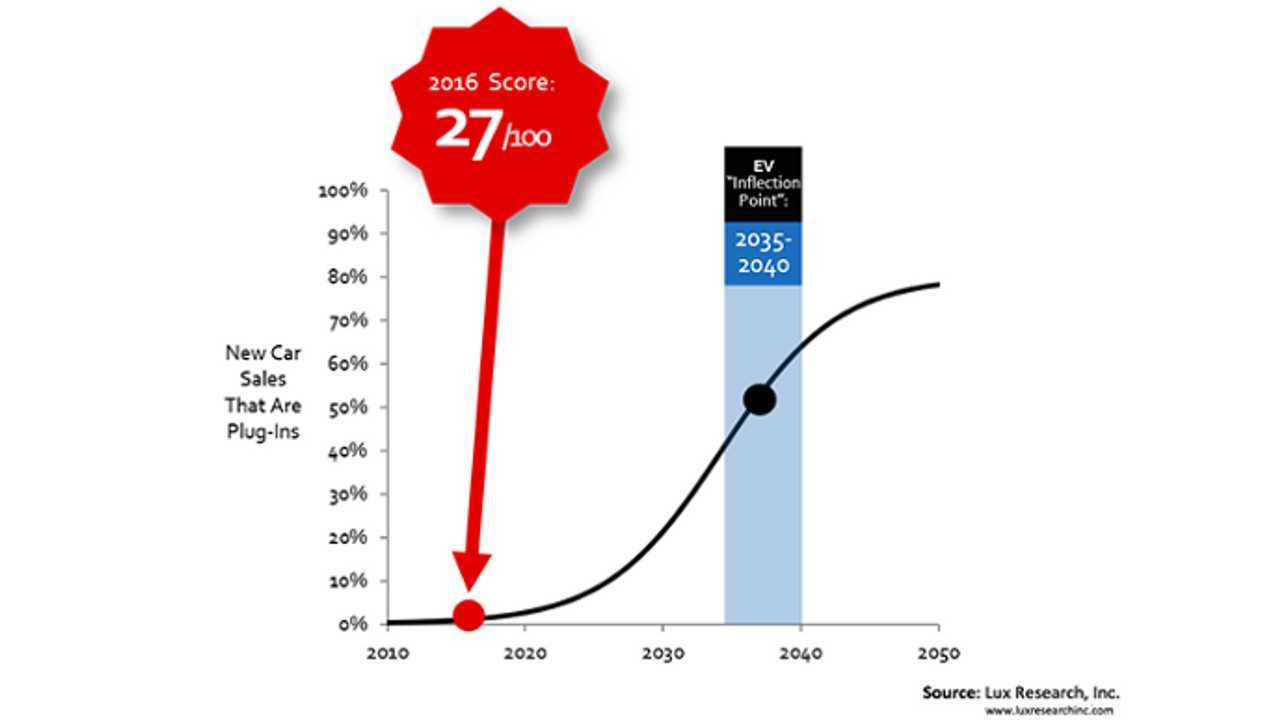 The idea is to forecast the time-frame when EVs will reach the Infection Point understood as more than 50% market share.

As of today Lux Research expects that to happen between 2035-2040. That's three full model cycles worth of development and iteration.

"Following on from this, we’ve launched an EV Inflection Tracker, which analyzes how compelling automakers’ plug-in offerings are as a leading indicator of when EVs will be positioned to take over the automotive market. Lux Research defines the “EV Inflection Point” concept as the year range when plug-in cars (technically, both EVs and PHEVs) make up more than 50% of new car sales. We’re watching all the plug-in offerings but, most notably, for depth of competition in EVs with greater than 200 miles of driving range at a price point of $35,000 or less, around which time a significant acceleration of adoption can be expected. Given the lack of any vehicles, let alone a wide variety, that meets these criteria we’re far from the EV Inflection Point. In fact, in the 2016 edition of the Tracker, we estimate that the EV Inflection Point is in the 2035-2040 time-frame. This corresponds to three full model cycles worth of development and iteration: By then, for example, the Nissan Leaf will be in its fourth generation."

The EV Inflection Tracker can be shown not only for the total car market but also for every segment.

Lux Research decided to check five categories and already found that luxury vehicles are doing the best, which is in-line with diffusion of innovations from high-end to broader low-end:

"This 2016 snapshot can be further broken down by vehicle type, to look beyond the EV vehicle fleet as a proportion of the total fleet, and into how many truly viable EVs there are in each segment. Looking at five classes – small cars, large cars, SUVs, pickup trucks, and luxury vehicles – in terms of viable commercialized vehicles available as well as their track record, only luxury vehicles get a passing grade. However, these will fail to drive meaningful enough sales volumes for plug-ins as a whole. They do, however, represent the early incubators of technology that is too expensive for the mass market, making these OEMs important to watch for trickle-down innovations. At the opposite end of the spectrum, pickup manufacturers have done nothing to move the needle in terms of electrification, while in the middle there is some progress from the manufacturers of small and large cars. Overall, the automotive industry earns an overall failing grade of 27/100.

There is little doubt progress is being made, just as there is little doubt that EV proliferation is inevitable. While 2035 is a long time in the future, there are billions of dollars and market leadership at stake along that journey. The question is which automakers will take that lead by populating the +200/-35K sweet-spot."