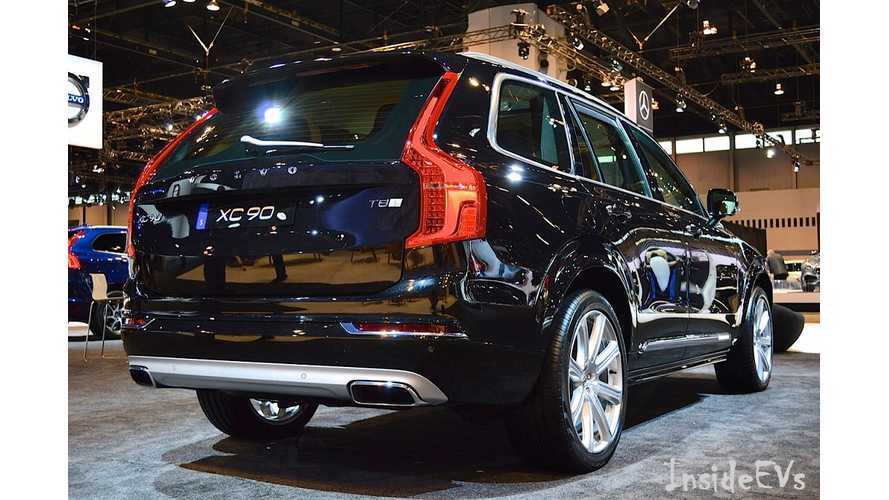 Volvo announced a large range of updates for the 2017 Volvo XC90 T8 PHEV.

The XC90 powertrain features a turbocharged/supercharged 320 hp four-cylinder 2.0-liter gas engine driving the front wheels and an 87 hp electric motor out back. In addition, there is 25 hp starter motor between the engine and the eight-speed automatic gearbox, smoothing the transition between driving modes. The available driving modes include the default Hybrid, Pure Electric, Power, AWD and Save.

Of the updates, the most substantial is Pilot Assist II. This semi-autonomous drive feature will now come standard on the XC90. The system will assist and support drivers up to speeds of 130 km/h (81 MPH) on well-marked highways. Sounds similar to Tesla's Autopilot.

Safety technology has been improved as well, with auto-steering, keeping the driver on the road, and Large Animal Detection.

The Sensus system, Volvo's in-car driver interface, now has access to Spotify and Park and Pay apps. Other Sensus updates include improved maps, TuneIn, Local Search, Yelp, and Record and Send. Users will be able to navigate more easily, find businesses and information, and record voice notes as reminders.

The Volvo On Call app has also received noteworthy updates. Added to its Apple Watch and Android Wear compatibility, it will now support Windows 10, and expand interaction to PCs and tablets. Voice-control will be an option for some features, along with calendar integration for navigation, and a new "smart button" feature.  The user can program the button to perform specific, chosen functions.

CleanZone technology is standard on the XC90 and ensures that the air entering the cabin is properly filtered (but it does not have a Bioweapon Defense Mode like the Model X).

The XC90 PHEV boasts very healthy competition for vehicles like the BMW X5 xDrive 40e and the Tesla Model X.