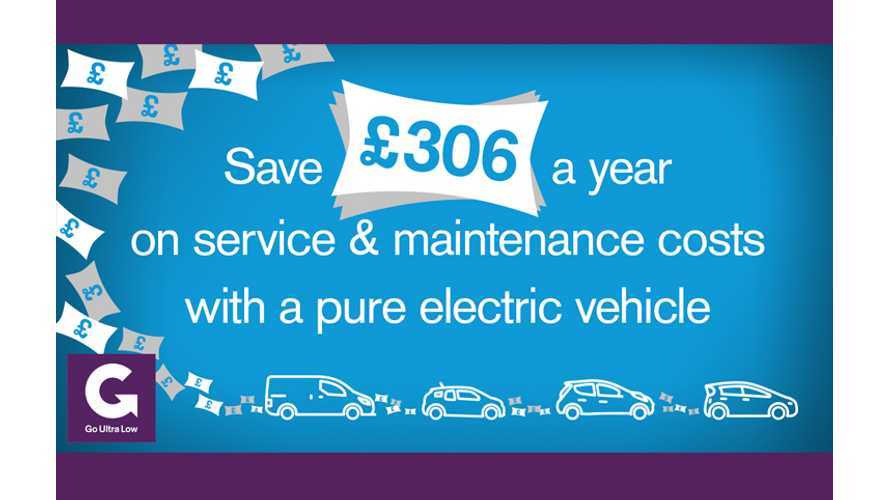 "Only 20% of car owners surveyed in the study correctly identified the low fuel costs of ULEVs – which can be run for as little as 2p per mile."

Trying to overthrow the myths, Go Ultra Low released its findings that on top of the average £750 ($1,040 USD)annual savings on the fuel bills (electricity compared to fuel), there is significant savings potential in servicing and maintenance of BEVs.

"UK motorists could save an average of £306 a year in garage bills by switching to a new electric car, according to research published today by the government and industry-backed Go Ultra Low campaign.

Every year, the average motorist forks out £400 for servicing and maintenance for their petrol or diesel car – more than four times the equivalent £96 per year cost for an electric vehicle. The findings from Go Ultra Low’s study of UK drivers reveal the extent of savings that ultra low emission vehicles (ULEVs) offer compared to petrol and diesel cars."

By extrapolating the findings to the whole car market the £13 billion per year spending across the country could turn into £3 billion and around £10 billion (nearly $14 billion) would be savings every year.

"The gap in running costs becomes even greater for some. In the same research, it was discovered that more than a third of petrol and diesel car drivers are currently paying significant additional service and maintenance costs, with 36% of respondents saying that they paid further sums of between £101 and £200 per year for unanticipated costs.

There are wider implications of having a car off the road for servicing. 36% of those surveyed claimed to have lost between £100 and £250 of income due to the inconvenience of their conventionally powered cars having to be kept and worked on in a garage."

The number of plug-in (including plug-in hybrids) now exceed in UK 50,000 - pure electric cars are in the minority of those 50,000 and the car market is like blue ocean for EVs.

"Plug-in electric car sales continue to rise at a rapid rate, with more than 28,000 ULEVs registered in 2015 – more than the previous five years combined. The 2015 plug-in car market growth almost doubled 2014’s total, surpassing the previous year’s 14,532 registrations total by 94%. Almost 50,000 Plug-in Car Grant-eligible EVs have been registered since the initiative launched in 2011."

“Pure electric vehicles have fewer moving parts than cars with an internal combustion engine. This means that there are fewer things which require maintenance, and servicing is simpler and cheaper to complete with fewer consumables. Drivers dread unexpected large repair bills, but as more motorists switch to electric vehicles, these killer bills are becoming a thing of the past.

“It’s time that the British public realise just how cheap electric vehicles are to live with – and it’s not just the cut-price servicing. Fuel and running costs can be as low as 2p per mile and plug-in vehicles benefit from the lowest rates of tax, offering the average driver significant cost savings.”