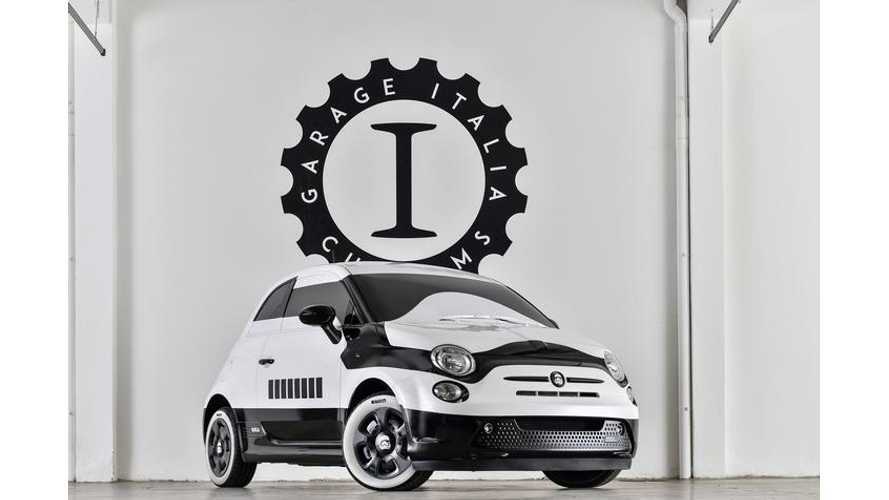 Fiat presented at the 2015 LA Auto Show a special edition of the 500e - "Star Wars: The Force Awakens" Stormtrooper.

The Black & white 500e was created by Garage Italia Customs and is used to promote the movie.

It's a neat concept and that promotes both the movie and EVs.

The exterior livery of the Fiat 500e stormtrooper is inspired by the armor of the First Order Legion, with a two-tone black and white custom painting of the car body. The windshield and the side windows are wrapped to bring out the immediately recognizable visor and helmet of the First Order stormtrooper. Inside, everything is in black and white, too, with total custom front and rear seats upholstered in leather and Alcantara®. The dashboard is painted in white and it is enriched by the "Star Wars" logo on it. All the details are painted in white/black lacquer, and a First Order insignia can be found on the two-tone leather-wrapped steering wheel. Much like the stormtrooper armor itself, the Fiat 500e brings together modern technology and functionality, but with an added classic Italian design, making it the perfect vehicle to take on the galaxy in style. The Fiat 500e stormtrooper was created by Garage Italia Customs.

Check out the Fiat 500e Concept car at the 2015 LA Auto Show. Fiat and Garage Italia Customs are Team Empire with this car decked out in classic black & white inspired by the armor of the new Stormtrooper (First Order Legion) from the Force Awakens. I was one of the lucky few able to get video of the interior of the car! Am I the only one now dreaming of the Empire????"