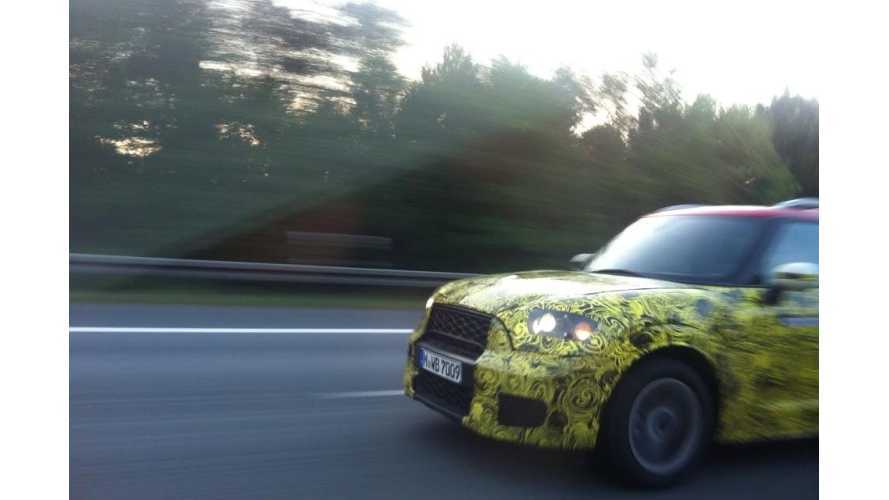 "Sometimes blurry photos can reveal some exciting details: A reader of Bimmertoday has caught a MINI Countryman F60 prototype which, judging by the sticker on the door, runs on a plug-in hybrid platform."

This isn't the first time we've seen a PHEV Mini Countryman though.  In fact, nearly 7 months ago video of one testing was posted to the Internet.

"Even though BMW has never confirmed a hybrid Countryman, the assumption has always been that the next-gen F60 MINI SUV will use the same plug-in hybrid as seen in recent BMW cars. We believe the new Countryman will be powered by the same drivetrain found in the BMW 2 Series Active Tourer which we’ve recently driven. That particular model features BMW’s 1.5 liter three-cylinder TwinPower engine, transversely mounted powering the front wheels through a six-speed automatic, and an 88hp / 136 Nm/100 lb-ft of torque electric motor, powering the rear wheels through a two-speed transmission. The gasoline engine produces 100 kW/136 hp and 220 Nm/162 pound-feet of torque/electric."

So, kind of like the BMW i8 then, which is what we pointed out some 2 years ago.

Expect the Mini Countryman PHEV to launch sometime in late 2016.