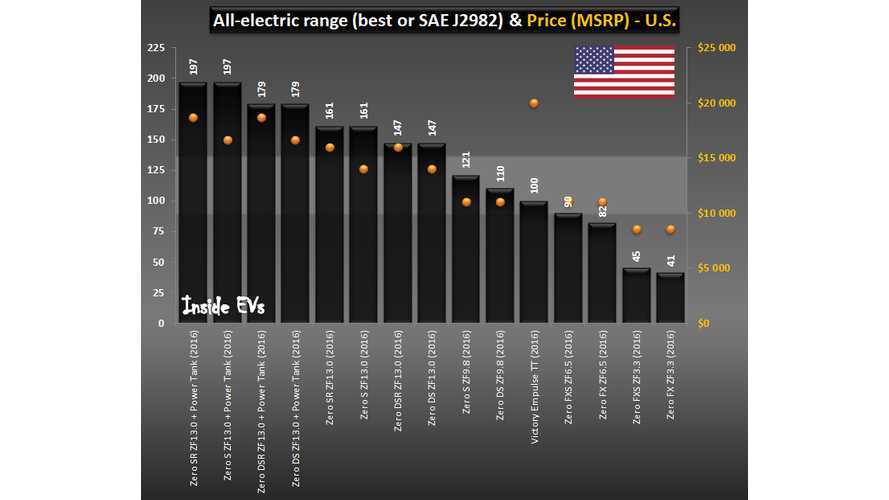 Since we had a bit of free time on our hands over the US holiday weekend (Thanksgiving), we figured why not explore the electric motorcycles offered in the U.S.

We began with the most known/popular Zero Motorcycles and Victory Motorcycles. Zero has a whole lineup of motorcycles with an excellent spec presentation, so this is more like a Zero comparison.

We hope there will be more entries from Alta, Lightning, Energica and others in the future.

Below we present base MSRP in the U.S. for all the models with all the battery pack options:

In the case of range, motorcycles don't have an EPA test standard, which could cause problems when comparing different models.

As of now, we used Zero's "City" rating for Zeros (and 100 miles for Victory) for best-case scenario:

"A “City” range test is specified to determine riding range during “stop-and-go” operation typically found in urban areas. This estimate is provided following the SAE J2982 Riding Range Test Procedure for On-Highway Electric Motorcycles to provide a reasonable and consistent basis for manufacturers to inform prospective owners of the riding range that can be expected under specified operating conditions. Actual range will vary based upon riding conditions and habits."

We appreciate any help and ideas on how to present electric range for these unrated motorcycles.

Second attempt is to illustrate the range at a constant 70 mph (112 km/h) speed (no rating for Victory):