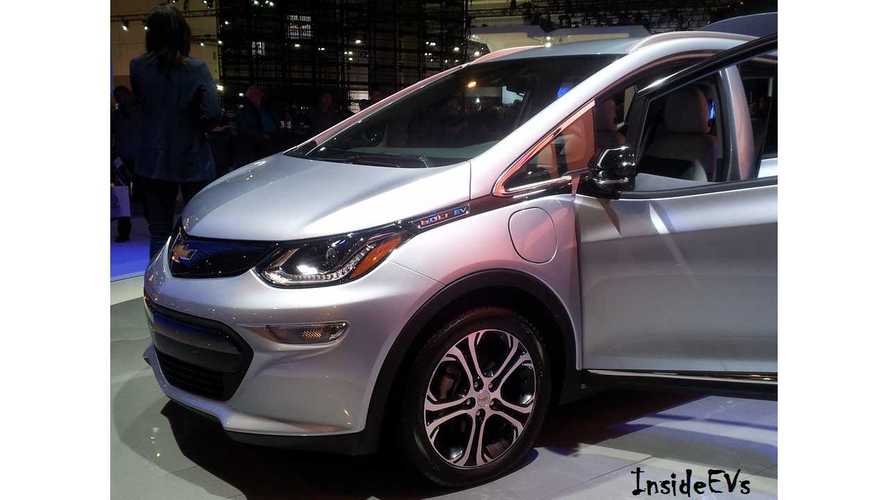 While General Motors has stated that the upcoming 200 mile, 2017 Chevrolet Bolt EV will be priced from $37,500 in the United States, an odd set of circumstances has revealed it will be a bit more in Canada.

And while the recent breakdown of the Canada dollar ($1.32 CAD = 1 US Dollar at time of press) means that is only equal to about ~$32,400 in US funds (a relative steal), to Canadians, that is still a lot of money, as their dollar was close to par just the summer before last.

Originally it appeared the pricing would be over $46,500 as that information came to us indirectly via a Chevrolet representative at the Canadian International Auto Show in February, as we asked him to walk us through Ontario's newly augmented rebate plan as it relates to GM's electrified vehicles.

"The MTO has said the 2017 Chevrolet Volt, now qualifies for $11,877 thanks to an additional seat.  The Spark EV only get $9,000 because of its smaller battery, and the all-new Chevrolet Bolt EV is the first to get the full incentive - $14,000 because of its battery and 5th seat."

Update (March 18th):  MTO has adjusted the rebate amounts to reflect the starting MSRPs of various trim levels (not just the base entry level offering) - meaning more dollars are available the more options are picked up.  The new/complete list is available to view here.

To learn how the program breaks down the criteria to arrive at a rebate amount, click here, but there is two pricing caveats that reveal minimum Bolt EV pricing:

With a confirmed $14,000 rebate available for the Bolt EV via the GM rep, that would mean the MSRP would need to be higher than $46,500 to fulfill the criteria of a 30% max rebate threshold.  We noted from February before  the announcement,  "We can still hope this is in reference to only a higher trim level, and that a base model may come under that result (and also have a lower rebate amount)."

For Ontarians the pricing is still fairly inconsequential, as the Bolt EV will still be an accessible all-electric vehicle inside a conventional 36 month lease ... perhaps ~$450 a month factoring in the government cash.

However with no federal plug-in incentive program, and no other province offering near the same rebate as Ontario (Quebec - $8,000, British Columbia - $5,000), with the other provinces essentially having none at all, the Bolt EV looks to be headed for some very unbalanced sales demographics in Canada.  In other words, Ontario is now Canada's California.

Doing some napkin-back math, leases in Quebec will likely be around  a minimum ~$600/month , BC ~$700/month...with the rest of Canada saddled with a nearly ~$850 monthly payment.