Op-Ed: The Other Side Of The Story – The KIA Dealer's Version of Steve's i3 Visit 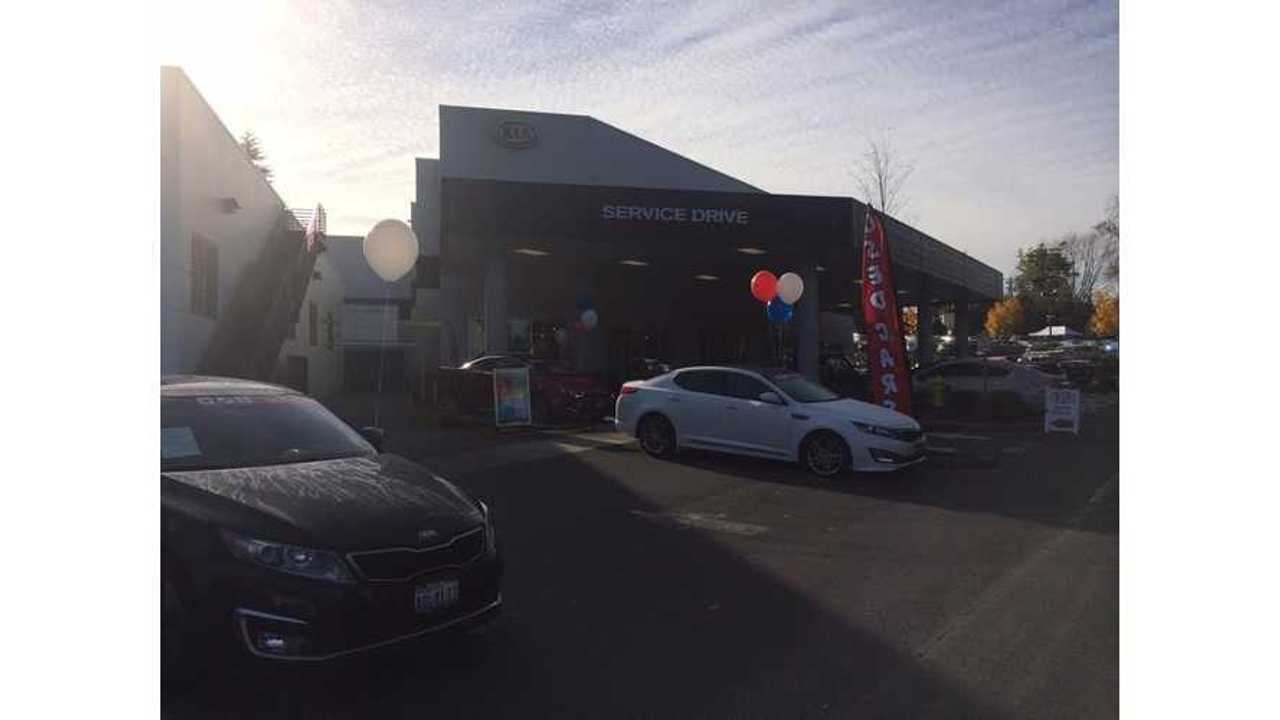 You may have read a piece here by contributor Steve C. depicting a confrontation of sorts between himself and a KIA dealer in regards to his ability to charge his BMW i3 at their store.

IN THE NAME OF FAIRNESS

Upon reading Steve's piece (originally at his blog here), I felt compelled to call that dealership just to gain clarity on what exactly happened that day from their perspective. We all know there are two sides to every story and it's only right to hear what happened from their point of view. One question I had was if Steve had contacted the sales manager, the dealership's owner or an official who had the authority/knowledge to make a decision whether to allow non-customers use of their fueling source and if it was advertised as open for use by the general public. Fair questions, no?

I had the pleasure of talking to Kenny Jakel, the sales manager of Lee Johnson KIA in Kirkland, Washington - the dealership that seems to be at the center of Steve's lengthy vent. The insight gained gives forth a rare window into how some EV enthusiasts can sometimes do more harm than good.

“And when the KIA salesperson approached me while I sat humbly in my i3, I thought that it may be the smoothest contact across the EV demarcation line in history. For that salesman was carrying a baby!

Easy was not to be. The KIA salesperson was in such a foul state upon my request to charge on the CCS plug that I started worrying about the baby’s wellbeing. What a conundrum! Would he start trembling with rage, dropping the baby? Would he get animated, and set the baby down on the BMW? What if the baby had a poopy diaper? Oh, heavens!”

Attempting to avoid a standoff that would make Papa Boehner and Mama Pilosi envious and proud, I offered to write about (him and) the KIA dealership in a blog post. Shockingly, the salesperson merrily asked me to park the i3 “right in front of the dealership” to charge. After plugging in, though, his parting comment was, “this charger is for emergency use only.”

Mr. Jakel's recollection of how this occasion transpired is quite different. He states that having his tiny baby with him did not make him onery, skeptical nor unfriendly. An auto professional, Kenny is the dealership's Sales Manager, not “a salesman”.

His point of view upon first contact with Steve was that he parked his BMW at his one-and-only quick charger and set off ( to ask permission ) on a mission – that being for confrontation. We all know that these issues often happen when one person approaches a situation with certain biases or expectations and this can color our outward posture, tone or presentation. Mr. Jakel says he was polite and professional, and not ready to “start trembling with rage” - a very strong assertion coming from EV-blogger Steve. Leaving that to differing personal perceptions, we'll continue to Steve's account. He contends the “salesman” changed his tune once Steve cleverly decided to tell him he would blog good things online if they consented to a free charge whilst he visited, that Steve would write a ( hopefully ) positive piece on their SoulEV.

In Kenny's version of what went down that day, he said he informed Steve that the fast charger was for critical need use with dealer cars, but informed him they had several L 2 chargers up front and he was more than welcome to charge there. Next, Kenny handed Steve off to one of his sales staff – as he was holding his baby - and Steve wanted to take photographs. The salesman then gladly ( “merrily?” ) directed Steve to the front of the dealership where the chargers were located. Mr. Jakel said Steve informed him he was a blogger and inferred, “he would thrash us unless we treated him nice”. Steve: “I'm a blogger, this is what I do for a living!”. Kenny told me his mom once taught him to “pick his battles”, and he chose to deal with this man and his i3 in a cooperative, professional manner as to not incite some sort of scene.

There you have it – two versions of the same encounter. One paints an unfriendly dealer, hoarding his Fast-Charger to maintain his product, who, in the opinion of the writer – should avail it to the general public using all brands of EV due to the fact his charger had both CCS and ChadeMo capabilities. Jakel said he discovered his QC was listed on Plugshare, and called to correct their error. It would be understandable to have a non-customer with another brand car assume the KIA dealer's QC was open to the public by seeing it listed there. This doesn't seem to be the case with Steve, as it appears he read about the QC's existence and attempted to use it. Mr. Jakel asserts there is no process in place at his dealership to collect-and-charge at this time. He stated that KIA is installing several such QCs at dealerships in our area, all intended for dealer use. His was only the first to be installed.

Was Steve looking for an axe to grind? Did he see this as a good controversy for a story? The truth is out there and very well may be something in-between as is the case ofttimes. All we have to go on from Steve's perspective is what he wrote. In his piece, Steve blogged that he has used “guerilla tactics” to charge in the past, but those ways were no longer publically acceptable. Were they ever?! Is plugging in and leaving a restricted charger, assuming it's OK , EVER good ethics? Do we want to tick people off with our electric cars giving all EV drivers a black eye in the public's opinion?! We're not jerks, driving around looking for a slot to plug our cars in, or a freebie - just assuming a company wants to offer us free fueling opportunities in the name of good PR.. Tip: Never assume ( you know the saying ). I'll quote Steve verbatim: “

“Gone are the days of guerrilla tactics wherein I would pull into a restricted charging station, plug-in, and disappear knowing that 95% of people would feel dirty unplugging somebody else’s EV. I have also retired my other tried-and-true technique, which is quite the opposite of the “Plug-N-Run”: pull in, plug-in, stand outside of the car–all seven feet of me–and feebly attempt to puff my chest into a bird-chested intimidation to keep potential charge rage manicals away. “You feel lucky, punk?””

Steve uses the wordage, “standoff”, “conundrum” and “EV demarcation line”. His own descriptions convey a strong feeling of antagonism, or – an “us vs. them” mindset.

A few weeks ago I wrote an Op/Ed piece here on re-naming EVs to something that resonated more with people everywhere. I mentioned Recumbent Bicyclists and how that small subgroup of bicycling enthusiasts deeply believed that their seated form of cycling was superior in many ways to the standard, upright-seating cyclists in the vast majority. What ensued were bouts of name-calling, finger-pointing and a derogatory war of words predominantly coming from the minority – a war they eventually lost.

I feel Steve's assumptions, regardless of the feeling he got from his encounter with Kenny – were wrong. Very wrong. As EV supporters we are a minority of a grand scale vs. folks who choose automobiles and trucks fueled by fossil fuels. When and if we get into negative attitudes placing ourselves as the just, biblical David, vs. a Goliath of conventional car owners – we have already lost the battle of sharing just how amazing it is to drive electric to society.

Truly, we need to take the high road in every situation and circumstance, not a contentious stance in the name of perceived justice. This way, we all win and EV drivers are more apt to be looked upon favorably versus a small minority of jerks at war with everyone else. This naturally includes how we present ourselves to car dealers as well. Imagine if we felt entitled to a full tank of gas from our local car dealer just because we stopped by their store! After all, they have gas on hand for the cars they sell, don't they?! Lastly, no blogger or journalist should use that position to intimate favorable reviews based upon his experience - just like no professional food critic with integrity would waltz into a restaurant and tell the employees who he was.

Update: Steve's original story via his blog has been removed upon request