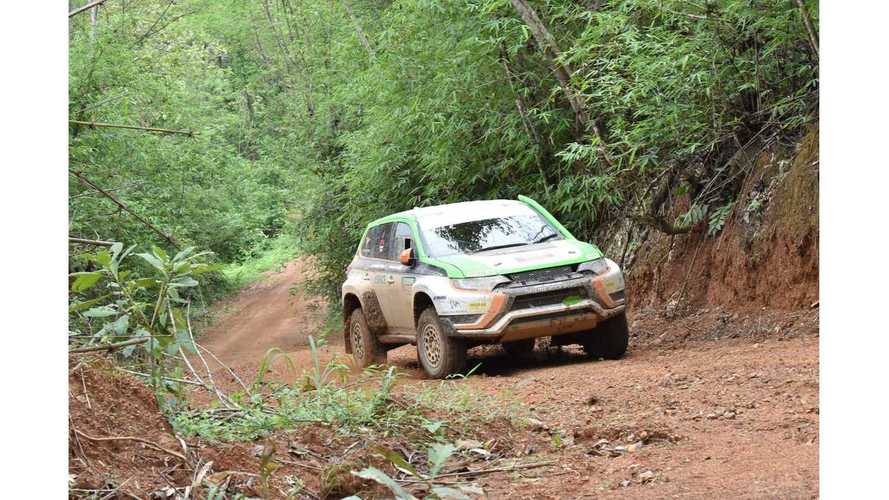 As announced two months ago, Mitsubishi sent an Outlander PHEV to Thailand to race in the 2015 Asia Cross Country Rally.

The rally was held on 8-14 August and Outlander PHEV was run by the Two & Four Motor Sports rally team with technical support from Mitsubishi Motors Corporation.

This is the latest version of Outlander PHEV, which is now entering the Japanese market before hitting Europe.

The electric Mitsubishi, with driver Takatsugu Aoki and co-driver Wuttichai Trithara, not only completed the 2,400-kilometer (1,490 miles) rally, but with a time of 40 hours 1 minute and 51 seconds took 20th place overall (well, first in T1-3 electric vehicle class, but we don't know which other EVs competed).

Next step will be Baja Portalegre 500 Challenge in October.

"The Outlander PHEV began no difficulty on August 8, the first day of the event, and then set off in the ceremonial start held at the remains of Thailand's old capital Chiang Mai. The next day (August 9) in the first day of full competition it finished in 17th place overall after successfully forging several wide and deep rivers that marked the very difficult Leg 1 of the rally. On August 10 Leg 2 took competitors over the longest and most mountainous stage of the rally with many sharp changes in elevation. After suffering a broken windshield the Outlander PHEV was forced to miss out the latter half of the stage and dropped to 25th place overall. Leg 3 on August 11 saw competitors driving over relatively flat and dry roads and Outlander PHEV's electric motor-powered acceleration and its S-AWC integrated vehicle control system helped it to climb up to a 22nd place finish. On Leg 4 (August 12) and Leg 5 (August 13) the Outlander PHEV steadily improved its position. On the final stage Leg 6, August 14, Outlander PHEV posted the third fastest time over a relatively flat course taking competitors back to Chiang Mai and crossed the finish line in 20th place overall."

"Surface conditions were tougher than expected. However the rally car showed plenty of its performance. The motor, generator, battery and other EV components made it through the rally with no issues - proof of its reliability and durability. We will complete a much better rally car and we are aiming for a higher placing for the Baja Portalegre this fall."

There is the old saying that racing improves the breed, so we wonder if these modifications to the rally SUV will trickle down to production vehicles:

The Japanese company didn't released any numbers so we don't know how much up from 12 kWh they went (or maybe just expanded the charging window), but for sure these advancements will pay off at some point, maybe in the form of the new high-performance ASX PHEV.

"The rally car is based on the production Outlander PHEV. Main components of the rally car's PHEV systems come from the production model with a revised control system in order to further promote MMC's EV and 4WD control technology development.

In addition, the rally car takes full advantage of the performance provided by the higher-output PHEV system and Twin Motor 4WD System through a higher ground clearance and longer suspension stroke, the use of rally-spec high-profile tires and other modifications made to improve its off-road performance. These changes resulted in the 2015 Outlander PHEV completing the rally for the third year in a row."

More on the event from Mitsubishi.