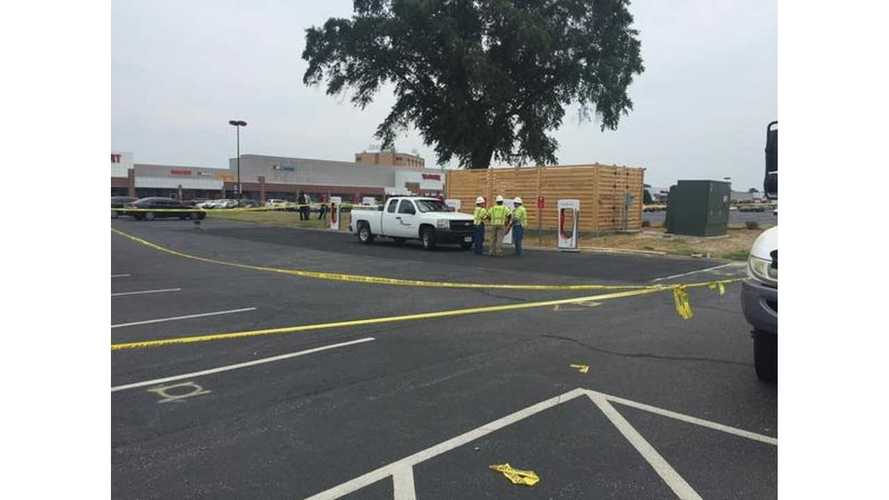 A private contractor working for Tesla on a new Supercharging station in Norfolk, Virgina that was scheduled to have its grand opening tomorrow has unfortunately died this morning of a possible electrocution.

ABC 13News Now says that a call came in at 10:30 AM this morning of a fatality at the scene of the 6 stall Tesla station.  Investigation into the accident is still under underway, the man was pronounced dead at the scene, with the initial 911 call indicating he was electrocuted.

Update:  A Tesla spokesperson has confirmed the incident to WAVY.com (also original video report from WAVY 10 below):

“During the installation process at our new Supercharger station in Norfolk, there was an accident involving an electrical contractor.”

Update 2:  The worker has been identified as  Steven Weaver (32) of Angier, N.C.

Tesla spokesperson Will Nicholas further commented on the status of the station on Wednesday:

"Due to an accident during the last stages of our Supercharger installation, we will be postponing our grand opening."

Witness saw man working near charging station around 7am. Saw him going in & out of fenced equipment area @13NewsNow pic.twitter.com/HC8pDbMtfq

A Dominion Virginia Power spokeswoman told the ABC affiliate that "the victim was a private contractor working on equipment."

Earlier in the day around 7AM, witnessed had seen the man entering and exiting the Tesla station's power/housing box.

Currently, Norfolk police have closed sections of the Janaf parking lot which houses the Supercharging stations located in the 5900 block of E. Virginia Beach Boulevard.