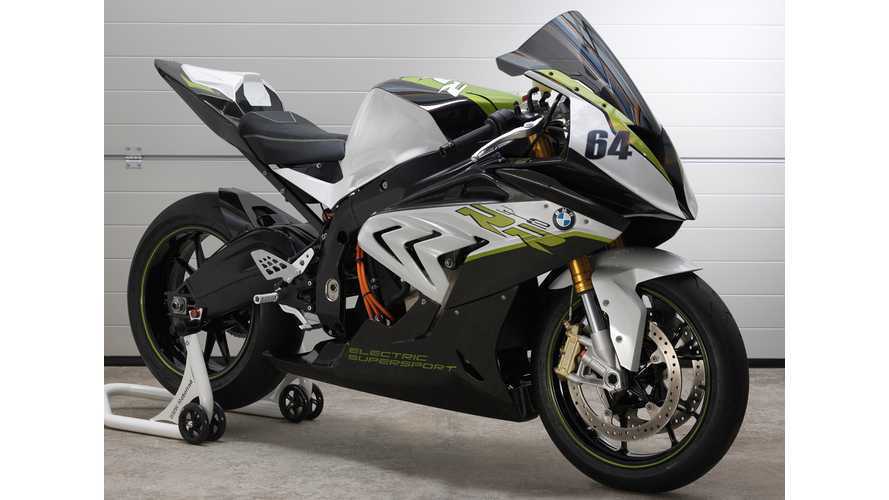 The BMW Motorrad Group announced the "experimental vehicle eRR" electric supersport motorcycle the other day via press release (full text below), and sparked a frenzy of speculation in the EV community.

No tech details are released, nor are plans to produce it divulged, but lots of pretty pictures were forthcoming.  Apparently, it's a rideable bike.

What's that? That little lever?  See it, up there?

Being the complete geeks we are, that thing that looks like a clutch lever is fascinating us, and a few notable nerds in the business.  Could it be a regen lever, you know, like the Zero owners community has been crying for?  Is it something else entirely?  When, oh when will we find out for sure?  Oh those coy Germans.

Everybody has an opinion on this bike, but probably one of the more interesting is from Sean MacDonald over at Jalopnik, who apparently talked to our old buddy Wes Siler, now camping-with-dog-whisperer-dude, for a reality check, where he's somewhat concerned that this may be an overgrown scooter adapting aBMW S1000RR chassis rather than a ground-up build designed specifically for an electric drivetrain.  There's merit in that concern, and yes, we'd hope that this is a bike that can take the Energica EGO and EVA to task, but we can only wait and see.

We will, however, weigh in and say that the motor drive mount looks pretty raw - sheet steel, possibly integrated with the battery compartment, and not milled, or hinting at a motor housing.  See here:

Without being able to see the motor in person, we're going to hazard a guess that it's very narrow, and a fairly large diameter affair...  you know.  Something like an EMRAX?  Oh my.

Munich. BMW Motorrad has a long tradition in pointing out new ways and thoughts for the topic „mobility on two wheels“. For that, again and again many studies were presented in the past giving views to the future. The experimental vehicle eRR, created as a project with the Technical University of Munich, embodies an idea of an electric powered supersport motorcycle made by BMW Motorrad.

Already a couple of years ago, BMW i showed the BMW Group’s visionary and sustainable approach with the vehicles BMW i3 and i8 and their revolutionary design principles (aluminum chassis and passenger cabin made from carbon fibre) and BMW Motorrad’s C evolution proved, that zero emission, riding fun and practicability do not exclude themselves.

Stephan Schaller, Head of BMW Motorrad, emphasizes: „Since their market launch, the RR is giving the creeps to motorsport athletes. If acceleration, handling or topspeed – the RR is setting standards. However, if acceleration on the first metres, up to 50, 60 kph, is the point, the RR’s 199 bhp have to admit defeat by another BMW product: the C evolution with its electric drive.

We asked ourselves: What happens when combining a sport motorcycle and an electric drive? The experimental vehicle eRR brings the topic zero emission and electric drive on a new, more fascinating level."

BMW Motorrad will announce technical details of the eRR at a later date.

Details about the BMW Group:

With its three brands BMW, MINI and Rolls-Royce, the BMW Group is the world’s leading premium manufacturer of automobiles and motorcycles and also provides premium financial and mobility services. As a global company, the BMW Group operates 30 production and assembly facilities in 14 countries and has a global sales network in more than 140 countries.