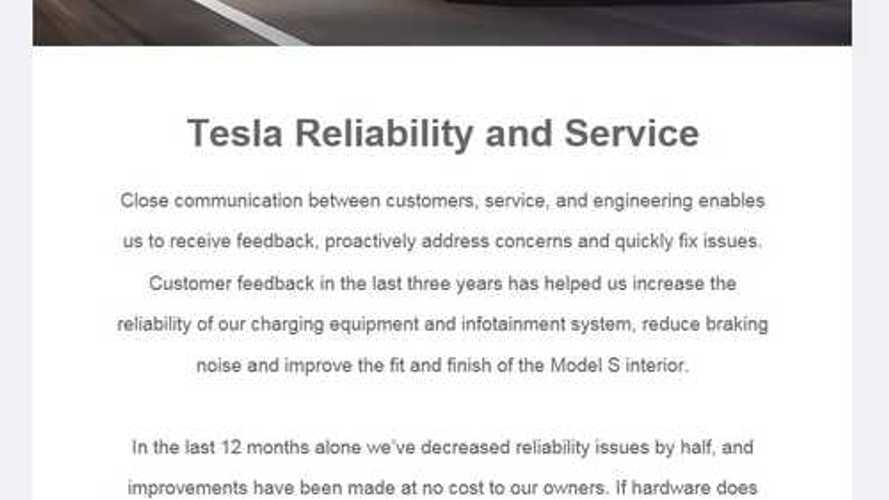 Consumer Report's Tesla Model S recommendation was dropped due to reliability issues. That opened questions on the topic to the broader public.

Perhaps in response, Tesla recently sent emails as part of its November newsletter (Tesla Updates - November 2015) touching on the subject. A portion of the email suggests that reliability has improved by a lot.

According to Tesla, in the past 12 months reliability issues have decreased by half, while the satisfaction rating stays ultra-high at 97%.

Close communication between customers, service, and engineering enables us to receive feedback, proactively address concerns and quickly fix issues. Customer feedback in the last three years has helped us increase the reliability of our charging equipment and infotainment system, reduce braking noise and improve the fit and finish of the Model S interior.

In the last 12 months alone we’ve decreased reliability issues by half, and improvements have been made at no cost to our owners. If hardware does need to be fixed, we strive to make it painless through our four-year/50,000-mile bumper-to-bumper warranty (and eight-year/unlimited mileage battery and drivetrain warranty). Even if potential issues have a low likelihood of causing future problems, we fix them. It's why 97% of Tesla owners expect their next car to be a Tesla.

To our owners we say: Thank you. Uncovering and resolving quality and reliability issues on an ongoing basis will allow us to continue to innovate and drive to accomplish our mission of a renewable transportation future.

Our customer stories offer the most compelling reviews of what life with a Tesla is really like.

If the Tesla Model S reliability improved so much, the high rate of problems might only be linked to the early Model S, but we are still not fully convinced that's the case.

The early Model S, with a higher number of reliability issues, shouldn't get Consumer Reports' recommendation (but there wasn't sufficient data for all-new cars, we believe), while the new, more reliable cars, perhaps should receive the recommendation if the reliability is actually now at a higher level, as Tesla states.

In the end, we likely will have to wait until next year (and more miles driven) to learn the verdict on how reliable today's Model S sedans truly are; still, it is good to hear some confirmation that Tesla is dedicated to continually improving its product.

Original portion of email (quoted above) sent via Tesla: