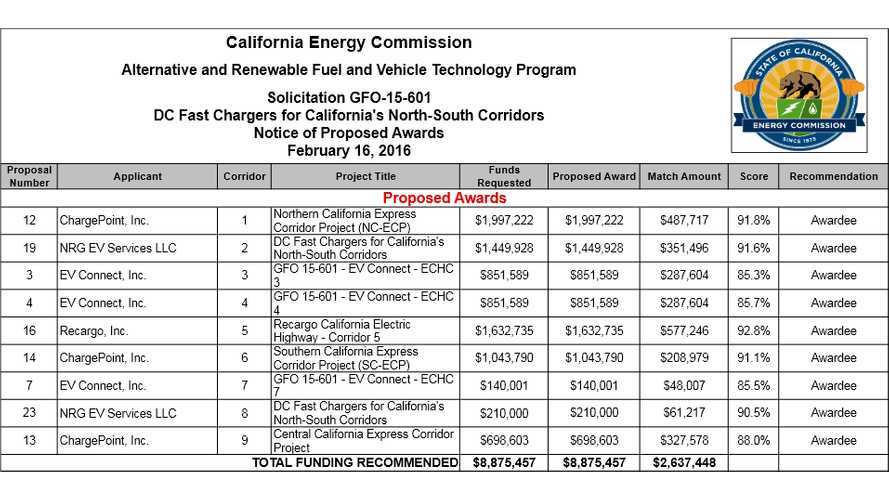 Perhaps finally California will catch up with Oregon and Washington with their part of the I-5 West Coast Electric Highway.

"This grant solicitation was an offer to fund projects that will install Direct Current (DC) fast charging stations on Interstate 5 (I-5), State Route 99 (SR 99), and along United States Highway 101 (US-101) from San Jose traveling South in California."

In case of California, the plan is to install DC fast chargers with both plugs (CHAdeMO and SAE Combo) or two separate single-standard chargers to serve all EV models (Tesla uses own standard).

Four companies were listed to do the job:

"ChargePoint is focused on proliferating EV charging across the country to accelerate the move to clean transportation and are honored to have been chosen to complete this program. The West Coast Electric Highway is key to expanding access to infrastructure especially in rural, disadvantaged communities to drive EV adoption. This project will support EV drivers in their daily travel and give drivers range confidence for longer distance travel."

More about the project here.

On July 27, 2015, the California Energy Commission (Energy Commission) released a Grant Solicitation and Application Package entitled “DC Fast Chargers for California’s North-South Corridors” under the Alternative and Renewable Fuel and Vehicle Technology Program (ARFVTP). This grant solicitation was an offer to fund projects that will install Direct Current (DC) fast charging stations on Interstate 5 (I-5), State Route 99 (SR 99), and along United States Highway 101 (US-101) from San Jose traveling South in California. The grant solicitation announced that there is up to a total of $10 million available for the agreements resulting from this solicitation and that the Energy Commission, at its sole discretion, reserves the right to increase or reduce the amount of funds available.

The attached table, “Notice of Proposed Awards”, identifies each applicant selected and recommended for funding by Energy Commission staff and includes the amount of recommended funding and score. This notice is being mailed to all parties who submitted an application to this solicitation and is also posted on the Energy Commission’s website at: http://www.energy.ca.gov/contracts/index.html.

Funding of proposed projects resulting from this solicitation is contingent upon the approval of these projects at a publicly noticed Energy Commission Business Meeting and execution of a grant agreement.