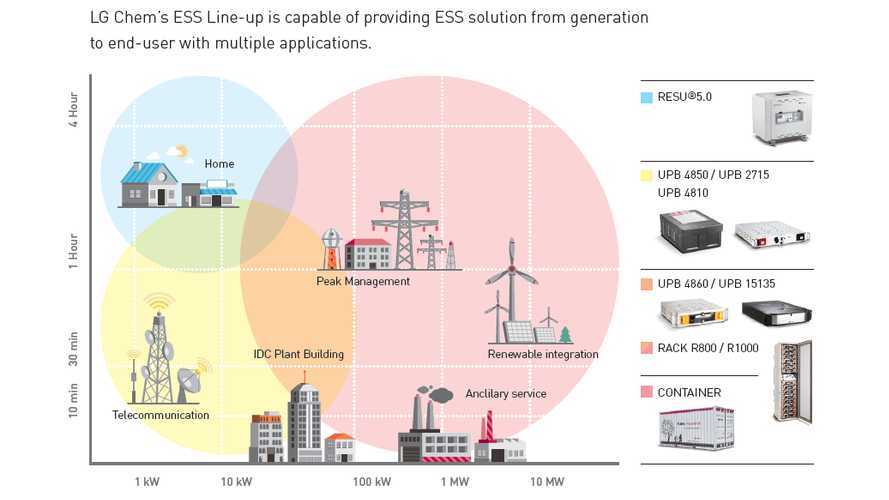 A major energy storage project was announced by STEAG, a utility company that invested around €100 million in six ESS totaling 90 MW at its power plants in Germany found in Herne, Lünen and Duisburg-Walsum (all in North Rhine-Westphalia) and in Bexbach, Fenne and Weiher (all in the Saarland).

Batteries will be supplied by LG Chem. Each of the six ESS will be 15 MW. In total 140 MWh of energy is to be stored - enough to supply 10,000 households per day with electricity.

"The large-scale batteries are to be used to provide primary control power – a service for stabilization of the networks, for which the Transmission System Operators invite bids on a weekly basis. Primary control serves to stabilize the network frequency when there are short-term fluctuations in the grid (caused, for example, by uneven feed-in of energy from renewable sources which deviates from the forecasts, by power plant outage or by fluctuations in consumption). The six systems are to be operated independently of the STEAG power plants and are capable of relieving the grid fully automatically within a few seconds when there is surplus supply, and also in reverse feeding energy into the grid."

"STEAG’s large-scale batteries will satisfy the current performance criteria for battery storage systems supplying primary control power, for instance the requirement of being capable of providing primary control power for at least 30 minutes. STEAG can thus play a pioneering role in the establishment of battery systems and the marketing of their energy. Rapid implementation and entry into the market as early as possible play a decisive part for STEAG."

Joachim Rumstadt, Chairman of the Board of Management of STEAG GmbH, explained the decision to make this investment as follows:

“Storage facilities and the creation of flexibility are essential elements in the implementation of the energy transition in Germany. STEAG has therefore decided to make this investment in large-scale batteries for deployment on the control power market, without making use of grants or subsidies.”

“Moreover, we believe that renewable energies will have to take a more responsible role in ensuring security of supply and, therefore, will have to provide more firm capacity on the energy-only market. Combined with extensive commercial and technical expertise in energy, which we can draw on, battery systems will be one key to resolving this issue.”

LG Chem has a high hopes about the German market, which is also the largest in Europe.

"The German energy market is the largest in Europe with annual consumption of around 550 terawatt hours and a production capacity of 125 gigawatts. Due to the political developments in the energy industry in recent years, the need for ESS solutions is enormous. With more than 200 projects implemented around the world, such as currently in Hokkaido, Japan, we have both the technology and the expertise to make a considerable contribution to this market."