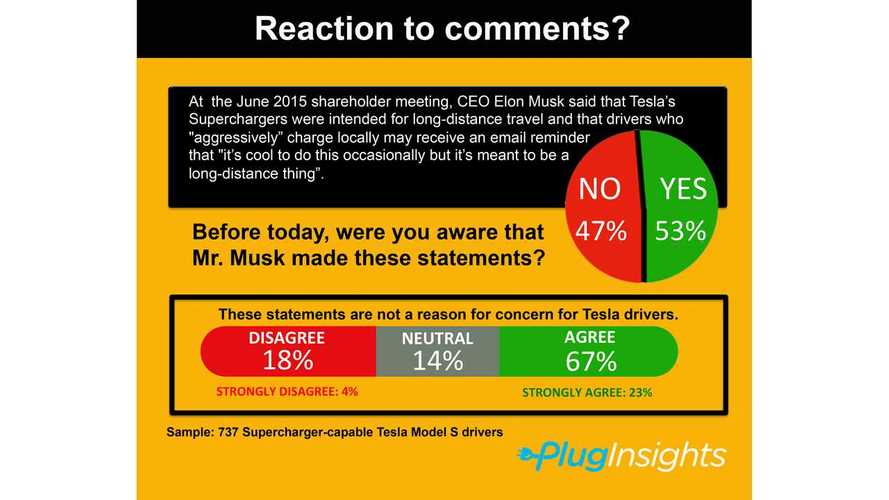 On Thursday, Tesla Motors started sending out Supercharger abuse emails to Model S owners that the company (or some random algorithm) determined were using the stations too frequent and/or as a home base for charging over residential options.

This statement in particular (below) was the "hot button" moment for specific individuals centered out:

And as one can tell by the rather lengthy, and varied, community comments in that story (here), there was a lot of very strong opinions; some from Model S owners, some from shareholders and some from concerned, potential future Model 3 drivers.

But what of Model S owners overall?

We spoke to quite a few of them, and the consensus by far was that the email was a reasonable request, and that it needed to be sent - but also that the Tesla PR department did a pretty terrible job both in the wording of the email, and who they sent it out to.

On the flip side of the coin, almost everyone who did receive the letter - perhaps unsurprisingly, were very vocal that they had done nothing wrong.

Some stated they had only used Superchargers a handful of times and should not have received it at all, while others said it was within their rights to use them "as much as they like" - ironically quoting Tesla's own former online literature on Supercharging usage (although perhaps debatably out of context).

Local Or Long Distance? (via PlugInsights)

We also spoke with Norman Hajjar, who is the Managing Director of PlugInsights, a data collection/survey research firm (although many will be more familiar with sister company - PlugShare).

Norman mentioned to us that his company had compiled some statistical data from over 700 Model S owners that backed up our own impressions of the reaction to the note, as well as adding further depth on current owners concerns about future Supercharger usage.

In fact less than 1 in 5 thought any email warnings would be "of concern" to them, but only about half agreed with Mr. Musk that Supercharging should be for long distance travelling only.

Editor's Note: PlugInsights had taken the survey of owners after the June shareholder's meeting where CEO Elon Musk had mentioned that Supercharging was really intended for long distance travelling only, and that Model S owners who aggressively charged locally may be getting an email.

Tesla Owners Concerns About Overcrowding Are Clear (via PlugInsights)

Our thanks to Norman and PlugInsights for the data charts!