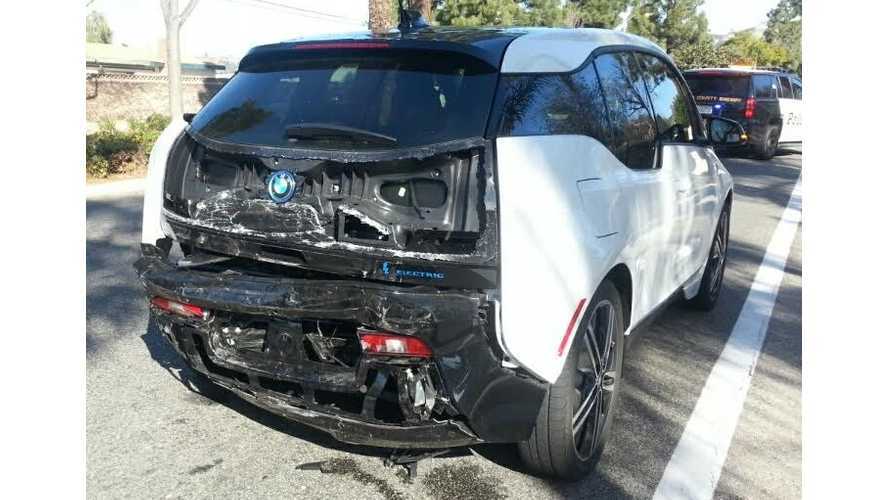 Yesterday I was rear ended by a driver who sped through a stop sign and apparently didn't notice me in front of him. His Cadillac hit me so hard I ended up 175 feet from the point of impact.

The impact was so hard that the center console arm rest flipped straight up and broke the latch. My seat back was even bent with the rear cover popping off.  So a violent crash to say the least. But with no broken bones or cuts, this could have been much worse for me. They took away the passengers in the Cadillac by ambulance also, but there condition is still unknown at time of press, though obviously their airbags deployed.

Remarkably, the BMW doors all open and shut normally. Even the rear hatch released with the remote and closed normally.

While lying in the ambulance, I heard the first responders saying "I can't believe how bad the Cadillac looks compared to that BMW!"

A testament to the safety engineering that went into the BMW i3.  Kind of sad this happened to my BMW which was less than 2 months old with 1600 miles on the odometer; and I don't look forward to the hassle of dealing with the other driver's insurance company to get me on the road again.

Editor's Note:  Out of some concern we did follow up with Warren today when we heard this news, just to check in on his status, and he reported back he was A-OK

"...im okay. Ambulance was a precaution because of sore neck, ankle, and elbow. Did a cat scan at the hospital, nothing was broken. Took some muscle relaxant at the hospital and pain medicine. Feared I would feel horrible when waking up this morning, but okay. I plann on taking it easy for the rest of the weekend to make sure the aches and pain go away.  Considering how light the i3 BEV is compared to a CTS, it fared pretty well."

My i3 ended up 173 feet from the point of impact

Spot where the Cadillac came to rest

The violent force bent the seat back and dislodged the seat back cover. Center armrest went straight up, with the lid latch broken

As is often the case, Warren's most recent modification on the car, a nifty rear bumper modification (which you can read about here), appears to have taken the brunt of the impact.